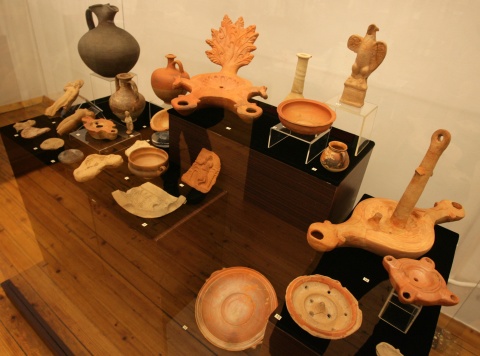 Pottery from the First Bulgarian Empire (681-1018 AD) is among the unique finds exhibited in the Bulgarian Archaeology 2010 exhibition in Sofia. Photo by BGNES

The Bulgarian Archaeology 2010 exhibit was opened Monday in the National Archaeology Institute museum in Sofia showing finds from the past summer.

Both of these finds belong to the team of Professor Nikolay Ovcharov, aka "The Bulgarian Indiana Jones", who excavated the Ancient Thracian holy city of Perperikon in the Rhodope Mountains and the St. Peter and St. Paul monastery complex in Veliko Tarnovo, Bulgaria's late Middle Ages capital.

One of the most exciting finds is a silver Arab coin from the 8th century found by Prof. Lyudmila Doncheva's team. The coin, found near the village of Topola in Eastern Bulgaria, is very important because it testifies to Bulgarians' defeat of the Arab invaders of Europe at the walls of Constantinople in 717-718 AD under the leadership of Khan Tervel (r. 700-721 AD).

On 25 May 717, Leo III the Isaurian was crowned Emperor of Byzantium. During the summer of the same year the Arabs led by Maslama crossed the Dardanelles and besieged Constantinople with 200,000 men. Leo III made a plea to Tervel for help, relying on the treaty of 716 and Tervel agreed. In the summer of 718 the Arabs engaged the Bulgarians in a decisive battle but suffered a crushing defeat and had to abandon the siege. According to Theophanes, the Bulgarians slaughtered some 22,000 Arabs in the battle, while Zigebert accounts for 30,000. The Byzantine-Bulgarian victory of 718 and the victory of the Frankish king Charles Martel in the battle of Tours stopped the Muslim invasion in the interior of Europe. Khan Tervel was called the Saviour of Europe by his contemporaries.

The necropolis excavated near the village of Topola contains countless graves from Bulgaria's pagan period before the late 9th century. Doncheva's teams found 52 new graves in 2010, with a total of 509 already excavated.

The graves from the early period of the First Bulgarian Empire (681-1018) reveal a lot of pottery and other items demonstrating that the proto-Bulgarians who mixed with the Slavs after arriving to the Balkans in 680 AD were not nomads but a sedentary people.

Over 50 other of the most exciting finds cover a time period from the Paleolithic Age to the Bulgarian Revival period (18th-19th century); these include bones of cave animals, ancient tools, and idols.