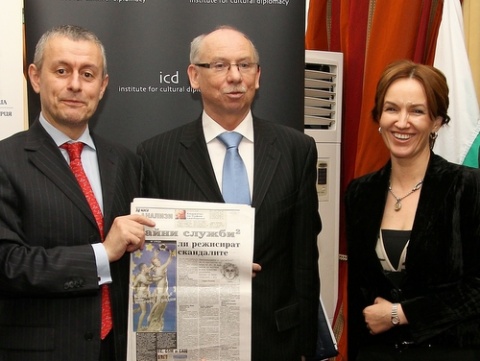 Solomon Passy (left) and Gergana Passy (right) pose with EU Commissioner for Financial Planning and Budget Janusz Lewandowski together with a photo collage of the 24 Chasa daily showing them as authors of the common mobile phone charger idea.

Interview of Novinite.com (Sofia News Agency) with Solomon Passy, the founder and Honorary President of the Atlantic Club of Bulgaria, former Bulgarian Foreign Minister (in the government of Simeon Saxe-Coburg in 2001-2005), and Chairperson-in-Office of the Organization for Security and Cooperation in Europe in 2004.

In the spring of 2008, he and his wife Gergana Passy, a former Deputy Foreign Minister and Minister for EU Affairs, came up with the idea for common universal mobile phone chargers - which became a reality in February 2011 as the European Commission presented their prototype.

In an exclusive interview for Novinite.com (Sofia News Agency), EU Commissioner for Industry and Entrepreneurship Antonio Tajani has recognized Bulgaria's contribution for the creation of common mobile chargers.

A special report of Novinite.com (Sofia News Agency) on the adoption of the common mobile phone charger and how the idea for it originated in Bulgaria READ HERE.

The idea of you and your wife Gergana Passy for common chargers for mobile phones is already a fact after the European Commission presented the prototypes a few days ago. How does that make you feel?

We are extremely happy to see that good ideas can be realized through and via the European Commission. This project to great extent restores people's faith in the power of the European Union.

We are filled with many new ideas that we can offer in this respect, which we believe will make people's lives better, and, what is more, they will also have a huge positive effect on the fight against climate change.

Of course, if there is one area that we are unhappy about, it is the fact that Bulgaria as a state cannot take advantage of these inventions. I continue to believe that if our state leaders and government want to introduce Bulgaria into this big, wide-open niche, our country will be able to become EU's spokesperson on a wide range of issues related to climate change.

How did your idea for a common universal mobile phones charger originate? What was the specific occasion that brought it up?

That was in the spring of 2008. Gergana and I sat down to have dinner with the kids and, discussing the long, hard day that had gone by, we found that we couldn't have several important conversations among each other because our mobile phones ran out of batteries. We started thinking why it happens so often that people run out of batters and are unable to charge them quickly enough, and we figured out that the main reason are the all kinds of useless variations of the mobile phone chargers.

So we decided that since Bulgaria already was an EU member we need to try to use this membership to the benefit of billions of people. We wrote a letter to the then EU Commissioner for Enterprise and Industry Guenther Verheugen and several other Commissioners.

Commissioner Verheugen responded to us very positively, he accepted our arguments, and things started to roll.

After that the effort had to go through the world CSM Association (GSMA), the International Telecommunications Union of the UN, and the 15 large global producers of mobile phones, and finally, after a lot of efforts, much dealing with bureaucracy, and also lots of persistence, things did happen.

I think this recognition is good because it is a perfect example allowing us to show that Bulgarians can come up with great ideas not only when they live abroad but also when they live and work in their home country.

John Atanasoff invented the computer in the USA, Carl Djerassi created the first oral contraception pill also there. People need to realize that Bulgarians can give great ideas while they live in their home country.

What is more, I don't think that the fact that Bulgaria faces criticism by the EU in many areas must lead them to underestimate us in other fields where Bulgaria really has added value and can be cited as a good example.

If we go beyond mobile phones chargers, what should the same principle of standardization be applied?

We mentioned that in our letters to Verheugen as well – the same principle can be applied to the standardization of photo cameras, video cameras, computers, all the way to electric shavers and toothbrushes if you wish.

This will save the world a colossal amount of electronic waste and carbon dioxide emissions that people produce every year just so the producers can keep their monopolies on some charging gadgets, whose diversity is really useless.

And what we have suggested will be of great benefit not only to the consumers but for the producers as well.

I can cite immediately a specific example. Computers today are a thousand times cheaper than they were 30-40 years ago but that does not mean that producers of computers today make less profit than they did back then. The mass production of a certain good leads to benefits for both the producers and the consumers, and, what is more, the greatest winner is environment, which means – us all.

Does the standardization of electronic devices have negative aspects – for example, do you think the criticism that it hinders competitiveness is valid?

This is not a valid argument because imagine that somebody today says that we should introduce different plugs and sockets for every electric appliance just in order to give way for competition. So we will thus have 2-cm sockets for vacuum cleaners, and then 3-cm sockets electric shavers and so on.

We just never think of how much standardization has made our lives easier in order to worry – the application of this policy of standardization of electric devices can only bring benefits.

Why do you think the Bulgarian government isn't more active in asserting Bulgaria's role and, for example, defending and promoting the common charger for mobile phones as a Bulgarian invention?

I can't say why that is but I will say that when I was in the government I did all I could to help protect what is Bulgarian and to promote every Bulgarian achievement whether it belonged to somebody from my political party, or just to some other Bulgarian citizen.