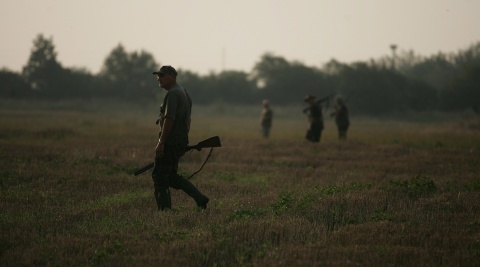 Bulgaria's recent outbreak of foot-and-mouth disease has shattered the hunting tourism in the southeastern part of the country because of the adopted restrictive measures.

In January, Bulgaria tackled outbreaks of FMD in three villages in the very Southeast as domestic animals were infected by a wild boar that crossed in from Turkey.

Earlier this week, the authorities said they eliminated the FMD threat but a number of restrictions remain in place such as no hunting in a large swath of territory.

Only the Tundzha State Hunting Area near Yambol had to send back over 10 groups of hunters from Greece, Turkey, and Bulgaria, losing BGN 100 000 in revenues, according to BNR.

The hunters believe that the total restriction is unjustified as it includes a ban of the hunting of birds, and birds do not get infected with FMD. The groups of hunters that had to go back were coming specially for the pheasant hunt.

The people in charge of the hunting areas in Southeast Bulgaria are further concerned that the ban on hunting would lead to an increase in the number of predators such as wolves, jackals, and foxes, which will then prey on the other game.