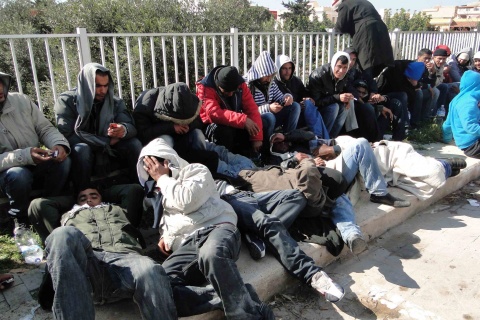 Immigrants wait to board a ferry on the island of Lampedusa, Italy, 12 February 2011. Italy declared a humanitarian emergency on its southern islet of Lampedusa and organized air lifts to the mainland. EPA/BGNES

The Italian government declared a "humanitarian emergency" Saturday as thousands of illegal immigrants tried to make it Italy following the revolutions and ongoing civil unrest in the Arab world, most notably Tunisia.

"The cabinet has proclaimed a state of humanitarian emergency following the influx of the large number of citizens from North Africa," Italy's government said in a statement.

Thousands of asylum-seekers sailed across the Mediterranean flocking to the remote Italian island of Lampedusa.

On Friday, Italy formally requested aid from the EU to combat the emerging humanitarian crisis with the North African refugees, and demanded a meeting of the EU justice and home affairs council.

Italy's Interior Minister Roberto Maroni and Foreign Minister Franco Frattini also requested the immediate deployment of a mission for patrolling and interception off the Tunisian coast by Frontex, the EU border control agency based stationed in Warsaw.

More than 1000 persons have debarked Sunday on the small Italian island of Lampedusa, making the total number of refugees over the last 5 days to some 5000.

The emergency situation will allow Italian civil protection officers to take immediate action needed "to control this phenomenon and assist citizens who have fled from North Africa."

The central government will thus release funds for local authorities in areas which have seen an influx of asylum-seekers, such as Lampedusa.

The North African immigrants come in finishing boats detected by coast guards and brought to the tiny island to receive food and medical aid. The lack of sufficient accommodation there force many of the migrants to sleep in the open.

Some of the asylum-seekers have been transported to centers in Southern Sicily.

On Sunday, the European Union declared that it is ready to help Italy. A spokesperson of the European Commission stated that Home Affairs Commissioner Cecilia Malmstrom is fuly aware of the pressure exerted on Italy, and has had conversations with Italian authorities regarding the matter. She has also contacted the Frontex agency that distributes resources for safeguarding EU's borders.

Italian Foreign Minister Franco Frattini recommended that Italy sends ships to patrol Tunisian waters to prevent illegal crossing, much as Italy did with respect to Albania during the 1990s.

Minister of Interior Roberto Maroni stated he will insist from Tunisian authorities to put a firm control and block the outflow of people from theiry country.

Greece, which has been struggling to fend off influx of illegal immigrants through its porous border with Turkey, and Bulgaria, which is also a external border state for the EU, have not reported for the time a rise in the number of migrants trying to cross into the EU that could be related to the recent and ongoing political upheaval in the Middle East and North African states, where Tunisia and Egypt have already seeing two revolutions oust their presidents – Ben Ali and Mubarak.

Last week, Bulgaria's EU Commissioner Kristalina Georgieva said in Sofia she was concerned with the possibility that the civil unrest in several Arab countries might trigger a wave of immigration to the EU.

"We need a swift reduction of the tensions in the Arab countries where there is enormous poverty. Egypt is the most populous and Yemen – the poorest Arab country. If there is a migration wave, it will be a huge problem for all of us," said Georgieva, who is the EU Commissioner for International Cooperation, Humanitarian Aid and Crisis Response.

She warned that the EU should come up with a new organization system with "serious tools" in the event of mass migration from the Arab countries gripped by mass protests.

Georgieva's comments come several days after Greece announced it is increasing its sea and land border patrols over fears that the wave of crises caused by civil unrest in Egypt and other Arab states might trigger a tide of illegal immigrants to the EU.

Tens of thousands of illegal immigrants from the Middle East see Greece as their destination or point of entry into the EU. Only last year, their number was 128,000, the highest in all EU member states.