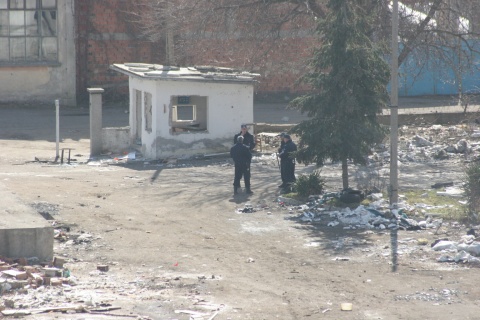 A photo shows how the local police in Kazanlak "restricted the access of outside persons" to the bankrupt Kazanlak dairy, which was pillaged by several hundred Roma as the police officers were handing out. Photo by BGNES

The police in Bulgaria's Kazanlak and Stara Zagora have sought to wash their hands over the incident in which hundreds of local Roma plundered a bankrupt dairy with hardly any intervention by the authorities.

The bankrupt dairy farm "Markeli" in Kazanlak, which used to be a major producer of yogurt, is now owned by a Greek bank since the former owners mortgaged it, the BGNES news reported.

The Roma have started pillaging the abandoned dairy farm by stealing all metal parts of the fence and the buildings, including by smashing the walls to get out the fixture, loading it in cars and horse carts, apparently intending to sell it for scrap.

According to the report of BGNES, about 20 police officers watched the scene helplessly and without interfering. The arrival of horse-mounted policemen also did not help.

The district police directorate in Stara Zagora released a statement Saturday afternoon apparently outlining convenient excuses for failing to prevent the plunder of the abandoned property.

The rather technical and apparently inconsistent explanation of the local police goes as follows:

"The property is managed by a Sliven-based firm, which on February 1, 2011, removed its security, and hired another firm for carrying out work for the clearing and securing of the terrain. The hired firm, on its part, got physical persons who between February 2 and February 9 destroyed the facilities and turned the iron into scrap.

"On February 9, 2011, the contract between the two firms expired but the entrance of persons into the property and the uncontrolled destruction of the facilties continued. Yesterday, the police department in Kazanlak warned the owner about the incursions against the property but he refused to hire security and to take care of the safety of his property.

"Today in the area of the former dairy the Kazanlak police department and the Stara Zagora district directorate have concentrated forces restricting the access of outside persons to the property in order to prevent the occurrence of an incident and the plundering of the facilities. Since Saturday morning over 10 persons have been arrested in the property. At the present moment the situation is peaceful. The increased police presence will continue as the owner is awaited to take measures to protect his property."

Interestingly enough, the apparently inconsistent and unclear statement of the local police is in contradiction with the photos and videos provided by BGNES.

A video of the situation in the former dairy in Kazanlak as of Saturday afternoon provided by the BGNES news agency view HERE.