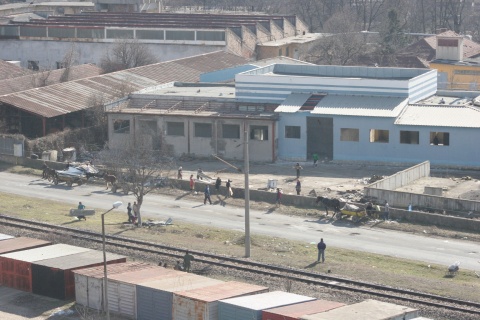 300 meters of metal fence of the former Markeli dairy were dismantled in an hour in order to be sold for scrap by members of the Roma community in Kazanlak. Photo by BGNES

Several hundred people from the local Roma community started pillaging a bankrupt milk-processing farm in Kazanlak in Central Bulgaria on Saturday as the police stood idly by.

The bankrupt dairy farm "Markeli", which used to be a major producer of yogurt, is now owned by a Greek bank since the former owners mortgaged it, the BGNES news reported.

The Roma have started pillaging the abandoned dairy farm by stealing all metal parts of the fence and the buildings, including by smashing the walls to get out the fixture, loading it in cars and horse carts, apparently intending to sell it for scrap.

The invaded the former dairy with hammers and axes, and are reported to have managed to dismantle 300 meters of metal fence in one hour.

According to BGNES, about 20 police officers watched the scene helplessly and without interfering. The arrival of horse-mounted policemen also did not help.

The explanation of the local police authorities READ HERE

Dozens of people watched the pillage from their apartment buildings nearby, horrified by the lawlessness and total failure of the Bulgarian law-enforcement institutions.

A video of the situation in the former dairy in Kazanlak as of Saturday afternoon provided by the BGNES news agency view HERE.

The situation in Kazanlak appears to be a case in hand with respect to the dire situation with the failed integration of the Roma in Bulgaria. Throughout 2010, the "Roma Issue" finally received EU and world attention as France deported thousands of Bulgarian and Romanian Roma back to their home states considering them a safety hazard.

As the members of the Roma communities in rural Bulgaria are almost entirely unemployed, many of them, together with members of the other ethnic groups in Bulgaria, turn to the collecting and often stealing of iron and copper cables to sell as scrap in order to make a living.

In addition to people living in abject poverty, the theft of metals around Bulgaria is often also handled by entire organized crime groups.

One of Bulgaria's three power utilities CEZ complained recently that the theft of cables and other components from power grids cost the company over BGN 10.1 M in 2008-2010.