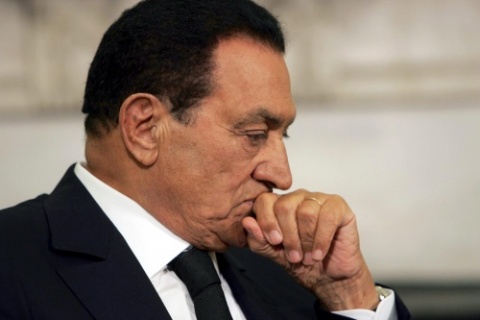 Hosni Mubarak served as President of Egypt for 29 years and 4 months. Photo by EPA/BGNES

82-year-old Hosni Mubarak has resigned as President of Egypt under popular pressure after 18 days of massive street protests.

Hosni Mubarak was the President of Egypt for almost 30 years - from October 1981 till February 2011.

Mubarak's resignation was announced Friday night in a televised by Egyptian Vice President Omar Suleiman, who Mubarak appointed as his first VP in 30 years just two weeks ago as a measure designed as a concession to the protesters.

"Taking into consideration the difficult circumstances the country is going through, President Mohammed Hosni Mubarak has decided to leave the post of president of the republic and has tasked the Supreme Council of the Armed Forces to manage the state's affairs," Suleiman said.

Egypt's Supreme Council of the Armed Forces will run the country as President Hosni Mubarak has resigned bowing head to massive popular protests in the past 18 days.

Suleiman said the Supreme Council of the Armed Forces will "run the affairs of the country."

Millions of protesters in Cairo's Tahrir Square and all across Egypt exploded in tears of joy as the news broke.

Mubarak was brought down by a "social network revolution" as the April 6th Youth Movement used Facebook, Twitter, and YouTube to start protests against the regime, which grew to attract massive popular support.

Mubarak himself has been unyielding for weeks as he sought to buy some more time in power in spite of the vigorous protests that threw the largest Arab country in violence between the civil protesters and small groups of Mubarak supporters believed to be paid thugs.

At the end of January, Mubarak yielded ground by announcing that he will not seek reelection in the new presidential elections in Egypt in September. In his last televised address to the people of Egypt Thursday night he made a patronizing speech announcing a partial transfer of power to Vice President Omar Suleiman while he stepped aside.

This, however, has once again failed to satisfy the massive protest movement.

Earlier on Friday, before VP Omar Suleiman's televised address, Mubarak and his family were reported to have the capital Cairo.

Egypt's armed forces will be in control of the country presiding over an expected transition to democratic government with free elections.