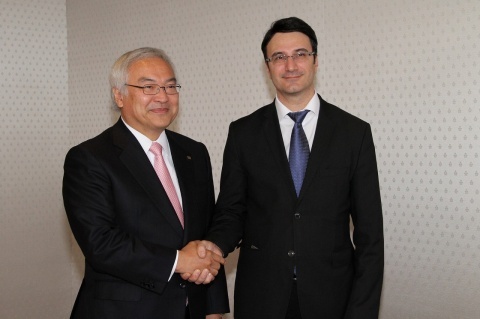 Japanese corporation Toshiba will open a regional representation in Bulgaria that will handle its operations in Central and Eastern Europe, the Middle East, and North Africa.

Thus, Bulgaria will become the second European country after the UK with an EMEA operations office of Toshiba, according to the Bulgarian Ministry of Economy, Energy, and Tourism.

Bulgaria's Economy Minister Traicho Traikov met Friday in Sofia with senior Toshiba executives Osamu Tomita and Keizo Honda as part of a two-day conference in Sofia dedicated to the development of electric cars.

The Toshiba management has confirmed that the company will construct a 10 MW photovoltaic park near Bulgaria's Yambol, an investment worth EUR 37.6 M that will provide electricity to 2000 households.

Another project of the Japanese corporation in Bulgaria will be a joint venture with still unspecified Bulgarian partner for the production and assembly of energy system inverters to be exported to the EU.

As part of a visit of a large Bulgarian government and business delegation in Japan led by PM Borisov, Bulgarian Minister of Economy, Energy, and Tourism Traicho Traikov met with Norio Sasaki, President and CEO of Toshiba Corporation.

The wide-scale project that Toshiba has offered to the Bulgarian government focuses on the development of "smart grids" and the introduction of electric cars based on renewable energy sources.