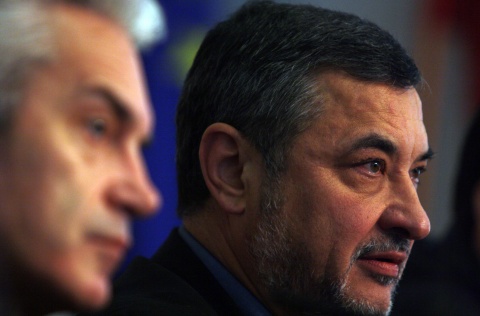 Volen Siderov (l) and Valeri Simeonov (r) during the times they were partners. Photo by BGNES

Unknown perpetrators have smashed early Friday morning the back window of the personal SUV of the owner of the SKAT TV channel, Valeri Simeonov.

The attack happened between 4 am and 6 am in the Black Sea city of Burgas. The SUV had been parked in front of the media's offices and Simeonov hopes one of video-monitoring cameras near the entrance might have taped the attack.

The media boss pointed out this is the second time his automobile has been vandalized and reminded that a total of 6 reporter's cars have been set on fire and 2 Molotov cocktails were thrown inside the offices in the last 2 years.

Simeonov believes the incident is part of the war, led against him by the far-right, nationalist Ataka party, since the time he had a falling out with its leader Volen Siderov. The TV owner further says he has a hard time calming down and motivating his employees, who are doing their jobs in an increasingly difficult situation under fear for their lives.

On Thursday, Kristina Patrashkova, Editor-in-Chief of the anti-government Galeria weekly, whose Sofia offices were blown by a home-made device, said Simeonov had called her, hinting the act had been perpetrated by Ataka over recent discrediting publications against Siderov in the paper.

In November 2009, ten municipal councilors, including Simeonov, cancelled their Ataka membership in Burgas and declared themselves as independent.

The former leader of the Ataka party group in Burgas, Simeonov then stated that he "absolutely disagreed with the parliamentary group of Ataka and the leadership of the party on policy issues."