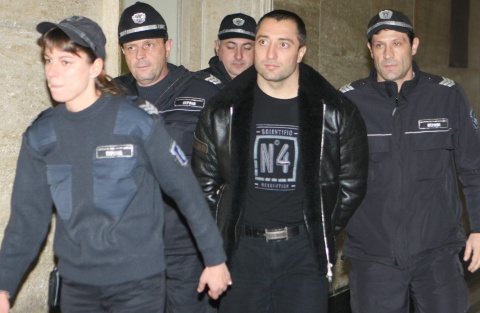 Dimitar Zhelyazkov aka Ochite is free now. Photo by BGNES

Bulgarian mafia boss Dimitar Zhelyazkov aka Ochite (The Eyes) has been released from jail after he spent there just 4 years and 10 months.

Zhelyazkov had to be released by the court, since otherwise he would have served longer than his current sentence

In 2008, Zhelyazkov was initially sentenced to 4,5 years in jail after confessing to the charges of heading an organized crime group involved in drug dealing – a sentence he received after an agreement with the Prosecutor's Office.

However, in April 2010, another agreement was made after a trial for money laundering, which resulted in a 4 years and 10 months for Ochite. The court in the Bulgarian city of Burgas decided that he should serve the longer of the two sentences.

The newest trial against Zhelyazkov was supposed to tackle Zhelyazkov's allegedly illegal property on December 20 2010, but a medical document was shown in the courtroom, stating that he suffers from headache and high body temperature.

Ochite's sentence was the pride of the former Bulgarian three-way government back in 2008, which repeatedly gave it as an example on their adequacy in fighting crime.