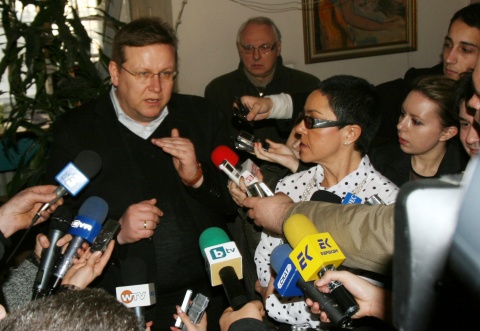 Hours after a bomb exploded in front of the offices of Galeria, an anti-government newspaper, early on Thursday in downtown Sofia, the editorial staff staged a press conference at the very same building.

"Prime Minister Boyko Borisov knows who stands behind the blast and it is his duty to name the perpetrator. Interior Minister Tsvetan Tsvetanov still has made no comment. This is a disgrace!," Editor-in-Chief Kristina Patrashkova said against the backdrop of broken windows and debris.

"I can tell you that the attack comes from structures, which are equally close to the authorities, as well as to the shadow economy and who are interested to stop Galeria weekly investigations," Deputy Editor-in-Chief Yavor Dachkov said.

"I have my own suspects, but will not name them as I have no evidence," he added.

According to him the blast aims to intimidate not only the journalists working for the weekly, but also its informants, who in his words are "people ready to make more revelations about how intertwined the authorities and organized crime have become in Bulgaria."

"The attempts to get us intimidated will fail. We will not be scared and hope that the sources that we use will not retreat in the face of the threat either," Dachkov said.

The deputy editor-in-chief specified that a day earlier he had an important meeting with informants, who were ready to reveal secrets about the political protection that smugglers enjoyed over the years, discrediting a number of members from the parliament body for controlling the State Agency for National Security (DANS), including former Prime Minister Ivan Kostov.

Dachkov said he is shocked by rumors, suggesting that the attack is a PR trick, masterminded by the journalists themselves.

The two heads of the newspaper denied to have ordered the blast and were all too quick to say that Aleksei Petrov, a highly controversial businessman, considered to be the prime minister's archenemy and patron of the weekly, has not done it either.

The tapes, whose authenticity is still not verified, allege that the government of PM Boyko Borisov is favoring certain companies and individuals with respect to investigations and appointments in the Customs Agency. All tapes feature conversations of Customs Agency head Vanyo Tanov.