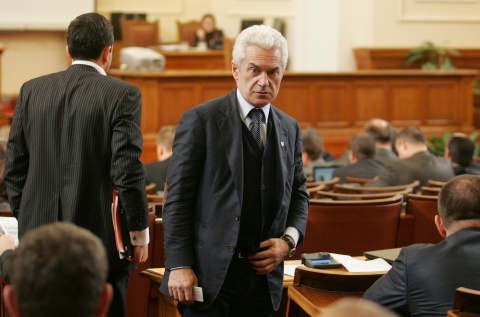 A group of plotters is trying to stage a coup d'etat in Bulgaria starting with Thurday's explosion at the office of the Galeria weekly, according to Volen Siderov, leader of the nationalist party Ataka.

Siderov, who is an informal coalition partner of Prime Minister Boyko Borisov, commented Thursday that group is headed by President Georgi Parvanov and is instigating backstage actions against the Borisov Cabinet.

The blast that occurred before the office of the Galeria weekly early Thursday morning did not hurt any people. The Galeria weekly is a controversial newspaper known to the be mouthpiece of Aleksei Petrov, a former secret agent of the Bulgarian State National Security Agency DANS, who in February 2010 was arrested in a much advertised special police operation "Octopus" but the organized crime charges against him have been downsized ever since.

In January 2011, the Galeria weekly caused "Tapegate", a scandal by releasing tapped conversations of senior Bulgarian government officials providing discrediting information regarding the Borisov government. The tapes are believed to have been sneaked out of DANS or the Interior Ministry but their authenticity remains disputed.

Thursday's explosion led the Editor-in-Chief of Galeria, Kristina Patrashkova, to declare that the bomb is intended to intimidate the paper.

According to Siderov, the plotters include Aleksei Petrov and the leader of marginal conservative party RZS Yane Yanev.

Siderov made it clear he believed the group around Petrov staged the blast at the Galeria weekly in order to simulate an assault on the newspaper by the government. He said also that the RZS leader Yanev planned to simulate a car accident against himself in order to draw public sympathies.

"This is a mafia-like circle. Everyone can make their own conclusions if the bomb blast against Galeria was organized by the paper itself," the Ataka party leader said.

Siderov believes that the editors of the Galeria weekly – Kristina Patrashkova and Yavor Dachkov – must be investigated and tried for abusing classified information – meaning the tapes of wiretapped state officials' conversations that they leaked to the public in January.

The nationalist leader complained that the Prosecutor's Office is not taking action, and said that this is probably thanks to the connections that Aleksei Petrov had with former Chief Prosecutor Nikola Filchev (in office 1999-2006).