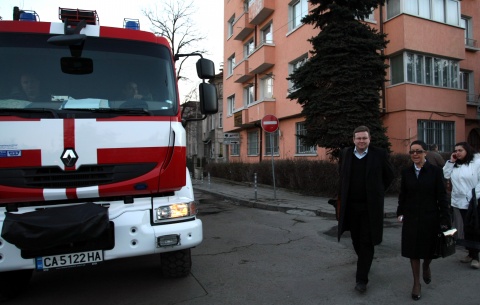 Yavor Dachkov (L) and Kristina Patrashkova (R), editors-in-chief of the Galeria paper after the blast on Thursday morning. Photo by BGNES

The European Commission has called on the Bulgarian authorities to conduct a thorough investigation into the blast that hit the offices of Galeria, an anti-government newspaper, early on Thursday and bring those behind it to justice.

The European Commission has not been briefed about the circumstanced that led to the attack or whom it may have targeted, Pia Ahrenkilde Hansen, spokesperson for European Commission President Jos? Manuel Barroso, said on Thursday when approached by journalists.

"We believe that Bulgaria will carry out a thorough investigation into the blast and the perpetrators will face the court," she added.

Taking up a question Pia Hansen specified that no changes in the schedule of the European Commissioners, who are paying a visit to Bulgaria on Thursday and Friday, have been made for the time being.

A bomb exploded at the offices of Galeria, a Bulgarian anti-government newspaper, damaging neighboring buildings, at 5:40 a.m. in central Sofia on Thursday.

The tapes, whose authenticity is still not verified, allege that the government of PM Boyko Borisov is favoring certain companies and individuals with respect to investigations and appointments in the Customs Agency. All tapes are of conversations of Customs Agency head Vanyo Tanov.

Borisov himself has not shied away from admitting that he is regularly wiretapping members of the government and heads of authorities, drawing criticism that he blatantly abuses his office and breaks the laws.

Under local legislation, adopted after the collapse of the communist regime, wiretapping is allowed only "for the prevention and investigation of serious crime as defined by the criminal code when evidence cannot be gathered in any other way".