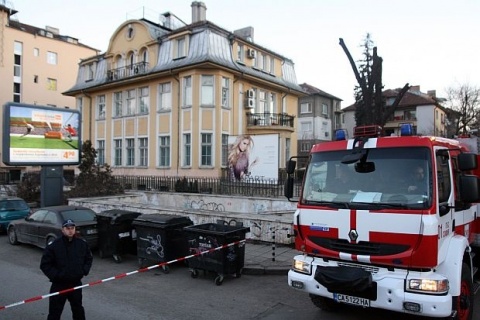 The office of controversial Bulgarian newspaper Galeria is believed to have been the target of the blast. Photo by Sofia Photo Agency

A blast in the building of the controversial Bulgarian Galeria weekly shook Sofia early Thursday morning.

At the moment, there is no information about injured people but damages are reported. There are broken windows of the office and nearby buildings.

The explosive device is believed to have been homemade. There is no information how powerful it was.

The blast was initially reported to have shaken the building of the Milenium publishing house. It is located at the Tsarigradsko Shosse in Sofia.

Nedyalko Nedyalkov, the owner of Milenium, also stated that the blast, which occurred after 5:30 am Thursday morning, probably aimed the office of Galeria.

"There are broken windows and many police officers. But the guard is fine. The door flied towards him and he hid under the table," Nedyalkov said.

Galeria’s Deputy Editor-in-Chief, Yavor Dachkov, said he was not allowed at the scene and has no idea of the damage. In his words, it was possible that the explosive was put under the window of the Editor-in-Chief, Kristina Patrashkova.

In January, Galeria weekly and the marginal conservative party RZS ("Order, Law, Justice"), both of which are deemed to be connected with Alexei Petrov, a former undercover agent arrested in a special police operation in February 2010, dubbed "the Octopus" and "the Tractor", caused Tapegate, a scandal that shook the Borisov Cabinet, by releasing tapped conversations of senior Bulgarian government officials providing discrediting information regarding the Borisov government.