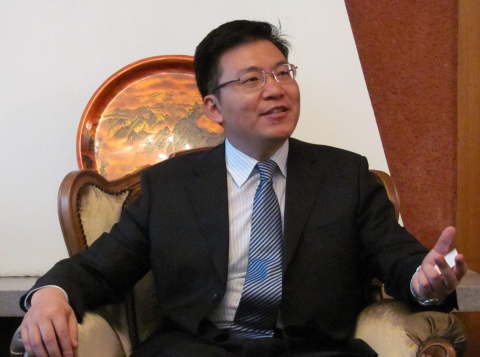 Bulgaria's largest English-language media Novinite.com (Sofia News Agency) would like to present to the attention of its readers from around the world an opinion article by His Excellency Guo Yezhou, Ambassador of the People's Republic of China to the Republic of Bulgaria, written specially for our "Diplomatic Channel" section.

The "Diplomatic Channel" section of Novinite.com (Sofia News Agency) is intended to provide ambassadors and senior diplomats with the unique opportunity to express their views through our outlets – the real time news website of Novinite.com (Sofia News Agency), The Sofia Morning News daily, and The Sofia Weekly – thus reaching hundreds of thousands of diverse, high-profile readers from all around the world.

We would like to invite foreign ambassadors to Bulgaria and other senior diplomats based in Sofia, Bulgarian ambassadors and diplomats stationed around the world as well as ambassadors and diplomats based anywhere in the world to submit opinion articles for our "Diplomatic Channel" section. We encourage opinion articles on both wider and more specific topics of international political, economic, and cultural relations as well as on topics explicitly related to Bulgaria. To make a submission, please use our contact information HERE.

Guo Yezhou was born in the city of Huai  An, Jiang Su province, in February 1966. He graduated from the Beijing Foreign Studies University in 1987 with a Degree in German studies. He joined the International Department of the CPC Central Committee. He served in China's Embassy in Germany in 1991-1993 and 1996-1998.

In December 2008, he was appointed Assistant Minister of the International Department of the CPC Central Committee.

Since August 2010, he has been Ambassador Extraordinary and Plenipotentiary of the People's Republic of China to Bulgaria. He is married and has one daughter.

Chinese President Hu Jintao has just paid a state visit to the US from January 18 to 21, which is of great significance to the sound and steady development of the China-U.S. relationship.

During the visit the leaders of two countries reached a series of important consensus including charting course of China-U.S. relations in the new era. Their Joint Statement acknowledges concerted efforts to build a cooperative partnership based on mutual respect and mutual benefit between China and the US. In my view, the following points are very crucial to understand this visit:

1. In the second decade of the 21st century, the international situation continues to undergo profound and complex changes. Both China and the US are at an important historical turning point of economic and social transformation domestically. It is historically and practically meaningful that the two countries agreed to build a cooperative partnership based on mutual respect and mutual benefit.

It is also the natural result of the constant development of bilateral ties, as well as the deeper and further development of positive, cooperative and comprehensive China-US relationship. By doing this, we keep with the trend of the times and are up to the common wish of the peoples both from the two countries and from the world.

Therefore, China underscores the need to develop a political relationship with the US that features equality, mutual trust and the precept of seeking common ground while reserving differences, to deepen their comprehensive, cooperative, mutually beneficial and win-win economic ties, to cooperate worldwide to cope with challenges, and to promote friendly exchanges between the two peoples.

Both China and the US shall take a strategic, long-term and an overall perspective, strengthen dialogue, communication and cooperation; respect the core interests of each other, handle sensitive issues in a proper manner, and promote sound and steady growth of bilateral ties.

2. During his visit to the US, President Hu Jintao reiterated that China would continue to follow the path of peaceful development. By following this path, China would continue to perfect its own system in a peaceful manner through constant reform, hard and persevering working, long-lasting friendship with other countries, and to achieve national development goals through equal and mutually beneficial cooperation. Following the path of peaceful development is a solemn commitment China made to the international community which China will unswervingly stick to. China not only says so, but also does so.

In recent years, China's development, especially the question how China would handle its relationship with the rest of the world, is attracting more and more attention from the world. Some people say that China is becoming "arrogant". Actually, sticking to the principle is by no means equal to being arrogant.

3. Respectively, as the largest developing country and developed country in the world, both China and the US have great and common responsibilities in maintaining world peace and promoting world development.

To build a sound and steady China-US relationship in the 21st century is not only conducive to the common interests of the people of the two countries, but also responsible for the world history. The US reiterates in the Joint Statement that it welcomes a powerful, prosperous and successful China with a bigger role in world affairs. China welcomes the US as an Asia-Pacific country that contributes to peace, stability and prosperity in the region.

China always upholds an open and inclusive regional cooperative policy, respects the interests and existence of the US in Asia-Pacific region. This region is featured with most diversified interests, and we do believe that harmonious co-existence, cooperative and win-win situation is in accordance with the benefits of the two countries and other regional countries.

Therefore, China welcomes the US to participate in ASEAN Summit and supports the US to develop cooperation with other countries. China and the US enjoy broad space for cooperation at the regional level. China is willing to work together with US to promote peace, stability and prosperity of Asia-Pacific region and the world at large.