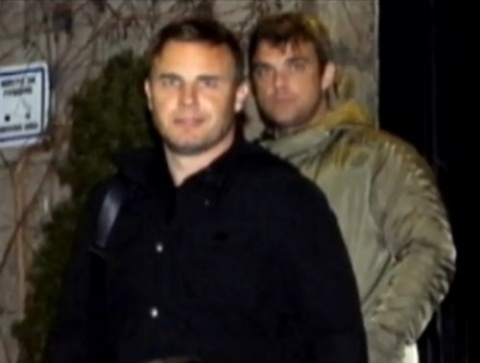 Members of British band Take That, singers and musicians Robbie Williams (back) and Gary Barlow (front) pictured arriving in Sofia at their way out of the Sofia International Airport. Photo by bTV

After the charter flight landed at Sofia International Airport, the musicians passed discretely through the VIP exit; were collected by 3 SUVs and taken to Grand Hotel "Sofia," the Bulgarian daily "24 Chasa" (24 Hours) writes.

Mark Owen was the first to emerge telling reporters this is the group's first visit to Bulgaria and they are considering having a concert during a future trip.

Williams, Owen, Garry Barlow, Howard Donald and Jason Orange are in Sofia to film a video clip for one of their latest songs. The filming will take place at the Boyana Film Studio.

The band was very popular in the beginning of the1990s, but lost a number of fans after Williams left them in 1995. One year later, 1996, the group officially split to reunite 10 years later still without Williams. Robbie finally joined them in the summer of 2010, announcing he will take part in Take That latest album.