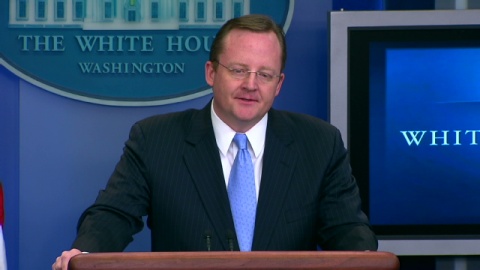 Obama's spokesman Gibbs criticized the Egyptian government for arresting and harassing journalists and rights activists, and called comments by Vice President Omar Suleiman that Egypt is not ready for democracy "particularly unhelpful". Photo by CNN

The US has made public for the first time its frustration with the pace of reform in Egypt a day after anti-government protesters in Cairo staged the biggest rally since the beginning of the unrest.

Vice President Joe Biden called on the Egyptian government to immediately lift the country's emergency laws, which have been in place for 30 years, during a telephone conversation with his Egyptian counterpart Omar Suleiman, according to a White House statement.

Biden urged "that the transition produce immediate, irreversible progress that responds to the aspirations of the Egyptian people," according to the White House statement.

It said the two vice presidents discussed "restraining the Ministry of Interior's conduct by immediately ending the arrests, harassment, beating and detention of journalists, and political and civil society activists, and by allowing freedom of assembly and expression; immediately rescinding the emergency law; broadening participation in the national dialogue to include a wide range of opposition members; and inviting the opposition as a partner in jointly developing a road map and timetable for transition."

Meanwhile President Barack Obama's spokesman criticized the Egyptian government on Tuesday for arresting and harassing journalists and rights activists, and called comments by Vice President Omar Suleiman that Egypt is not ready for democracy "particularly unhelpful."

"The government has got to stop arresting protesters and journalists, harassment, beatings, detentions of reporters, of activists, of those involved in civil society," Gibbs said. Previously, he and other US officials, including Obama and Secretary of State Hillary Clinton, called for a halt to the crackdown on journalists and activists without directly saying that the Egyptian government was responsible.

Asked about Suleiman's comment, made in an interview with ABC, that Egypt lacks the necessary "culture of democracy" for the changes demanded by protesters, such as freedom of speech and the right to organize opposition parties, Gibbs said the words went against what was happening on the streets of Cairo and elsewhere in Egypt.

"Vice President Suleiman made some particularly unhelpful comments about Egypt not being ready for democracy," Gibbs said, adding, "I don't think that in any way squares with what those seeking greater opportunity and freedom think is a timetable for progress."

The remarks reflect a growing US dissatisfaction with Egyptian President Hosni Mubarak and Suleiman, the intelligence officer Mubarak chose as his deputy to bring about reforms demanded by protesters who have convulsed Cairo and the Egyptian economy for more than two weeks.

So far, the Obama administration has been careful to call for democratic reforms in Egypt while also trying to maintain stability in a key Middle Eastern ally that is a vital Arab partner to Israel through the Camp David Accords of 1978.