Bulgaria Claims to Have Eliminated FMD 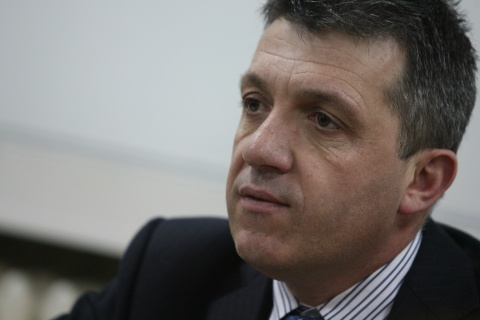 Bulgaria's top vet Yordan Voynov says the centers of FMD have been eliminated. Photo by BGNES

Bulgaria has eliminated the center of foot-and-mouth disease that emerged end of December 2010, according to Yordan Voynov, head of the National Veterinary Medical Service.

Three villages – Kosti, Rezovo, and Gramatikovo – in the Strandzha mountain region in the Southeast with animals infected with foot-and-mouth disease were detected in January, the last one being discovered on January 31.

Hundreds of domestic animals were slaughtered after the first FMD case in Bulgaria was found in the village of Kosti on December 30, 2010.

The virus was first discovered in a wild boar shot during hunting in Kosti. A second case was discovered January 17 in the nearby village of Rezovo. All infected animals have been euthanized and the village has been put under 3-month quarantine.

The boar that brought the infection was found to have crossed into Bulgaria from Turkey, prompting the Bulgarian authorities to start to rebuild border fences that existed in the Cold War period in order to stop the spread of FMD into Bulgaria from its southeastern neighbor.

"The centers of FMD in Bulgaria have been eliminated for the time being. All samples that we have taken from the southeastern region of Burgas are negative," said Voynov who is about for take over Bulgaria's newly-created Food Safety Agency in a few days.

He has pointed out, however, that the screening for FMD will continue for a long time. About 1000 domestic animals have been killed in total to contain the spread of FMD. Their owners have received compensations totaling BGN 600 000.

Five Bulgarian Districts – Burgas, Yambol, Sliven, Shumen, and Varna – have imposed restrictions on the movement of livestock and animal goods.

Countries such as Russia, Ukraine, and Belarus have introduced temporary bans on meat imports from Bulgaria.

The Bulgarian veterinary service will continue to monitor wild animals along the border with Turkey, setting up boar traps to find if the boars in the region are still infected with FMD.