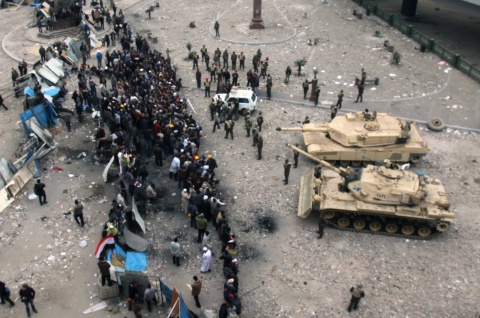 An overview of the scene as Egyptian soldiers communicate with anti-Mubarak actvists who formed a human line behind a coil of razor wire outside the barricades they have set up at Tahrir Square in Cairo on 05 February 2011. Photo by EPA/BGNES

Egypt's President Hosni Mubarak has met with ministers to discuss ways to revive the economy that was hit by the wave of continuing civil unrest and anti-government protests.

According to the Finance Minister Samir Radwan, the economic situation is "very serious". However, banks are preparing to reopen on Sunday, the BBC reported.

Earlier Saturday, Credit Agricole estimated that Egypt's economy loses USD 310 M per day as a result of the protests. Thus, the country has already lost several billion dollars as the demonstrations entered their 12th day on Sunday.

Meanwhile, opposition activists formed a human chain outside one of the entrances to Tahrir Square. They are trying to prevent tanks from crossing through barricades into what has become an anti-Mubarak enclave in the heart of Cairo.

Dozens of soldiers attempted to remove the barricades and restore order. A senior army official tried to negotiate the army's moves which led to arguments with protesters, who accused them of trying to retake control of Tahrir Square.

The tension was defused after the officer began negotiating with medics who have established a first aid station for wounded combatants just behind the first line of barriers.

Separately, a Saturday morning explosion at a terminal of the Egypt-Israel gas pipeline was initially reported a terrorist attack by the Egyptian state TV. However, it was later announced it was caused by a leak.