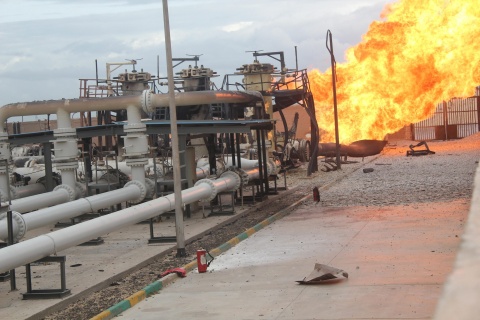 Saturday morning's explosion at a terminal of the Egypt-Israel gas pipeline was caused by a leak, and is not a terrorist attack as the Egyptian state TV initially reported.

The head of the Egyptian company for natural gas, Magdy Toufik, said in a statement that the fire at the Israel-Egypt natural gas pipeline in El Arish in Northern Sinai broke out "as a result of a small amount of gas leaking."

The natural gas terminal is located in Northern Sinai, 10 km away from the Egypt-Gaza border. The pipeline supplies natural gas from Egypt to Israel via the Gaza Strip.

Earlier, a regional governor in the Sinai, Abdel Wahab Mabrouk, told Egyptian media he suspected sabotage, but did not explain further, reported the Jerusalem Post.

Flames raged at the scene for three hours before they were successfully put out, Al-Jazeera reported.

Israeli officials are quoted as saying it was not clear whether the explosion affected the pipeline leading to Israel. Israel, however, stopped receiving gas supplies from Egypt under an emergency procedure until the situation around the incident becomes clear.