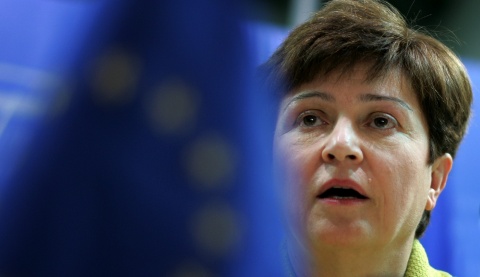 Bulgaria's EU Commissioner Georgieva is worried over a potential migrant wave from the Arab world triggered by the civil unrest there. Photo by BGNES

Bulgaria's EU Commissioner Kristalina Georgieva is concerned with the possibility that the civil unrest in several Arab countries might trigger a wave of immigration to the EU.

A migration wave to Europe would be a very serious problem, Georgieva stated on BNT late Friday night.

"We need a swift reduction of the tensions in the Arab countries where there is enormous poverty. Egypt is the most populous and Yemen – the poorest Arab country. If there is a migration wave, it will be a huge problem for all of us," said Georgieva, who is the EU Commissioner for International Cooperation, Humanitarian Aid and Crisis Response.

She warned that the EU should come up with a new organization system with "serious tools" in the event of mass migration from the Arab countries gripped by mass protests.

Georgieva's comments come several days after Greece announced it is increasing its sea and land border patrols over fears that the wave of crises caused by civil unrest in Egypt and other Arab states might trigger a tide of illegal immigrants to the EU.

Tens of thousands of illegal immigrants from the Middle East see Greece as their destination or point of entry into the EU. Only last year, their number was 128,000, the highest in all EU member states.

On Saturday, Egypt saw its 12th day of protests against the regime of President Hosni Mubarak.