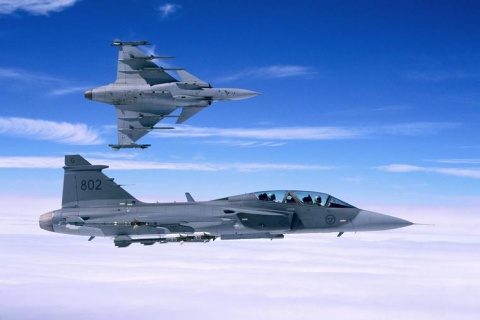 Angelov's visit to Saab in Sweden came right after, using diplomatic channels, Bulgaria asked defense industry companies from the USA, France, Germany, and Sweden for detailed information on their offers of new and second-hand fighter jets.

In a special statement, Bulgaria's Defense Ministry has announced the surveying of the prospective suppliers, while point out that the information request is exploratory, and that it does not mean yet the start of a tender for the purchase of multi-purpose fighter jets for the Bulgarian Air Force.

Saab's Gripen appears to be in competition for the Bulgarian purchase with France's Dassault Rafale, the Boeing F/A-18 Super Hornet, the Eurofighter Typhoon, built by a consortium including EADS, Britain's BAE Systems, and Finmeccanica of Italy as well as new or second-hand F-16 or F-18 by Lockheed Martin.

Bulgaria's Defense Ministry has pointed out that the management of Saab represented by its Vice President Lenard Sindal has confirmed its bid to sell fighter jets to Bulgaria. Saab has become the first foreign bidder to submit the detailed information on its jets requested by the Bulgarian government.

Saab's Gripen is currently employed by the air forces of Sweden, the Czech Republic, Hungary, Thailand and South Africa.