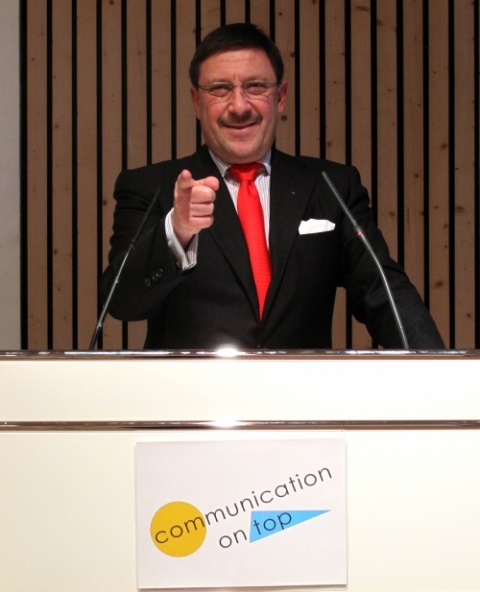 Maxim Behar was the only representative of Eastern Europe at the 2010 World Forum for Communication Top-Managers in Davos. Photo by M3 Communications Group, Inc.

Bulgarian public relations expert Maxim Behar has been selected to moderate the opening debate of the World PR Forum in Davos, Switzerland.

The World Forum for Communication Top-Managers will start on February 17 in Davos, Switzerland, and will continue for two days.

Bulgaria's PR guru Maxim Behar will be in charge of the debate between two of the world's leading experts in PR and marketing – Paul Holmes, Founder and CEO of The Holmes Report and the SABRE awards, and Garrett Johnston, VP Marketing Strategy of X5 Retail Group. Holmes and Johnston will debate on "New PR @ New Marketing"

The first edition of the world PR forum took place in February 2010, in the Swiss mountain resort Davos immediately after the end of the World Economic Forum, with Maxim Behar being the only lecturer not only from Bulgaria but also from Central and Eastern Europe.

In September 2010, Behar, who is the CEO of the largest Bulgarian public relations company M3 Communications Group, Inc., was elected among the members of the international committee organizing the 2011 world PR forum in Davos, Switzerland. He is the only Bulgarian member of the committee of the top global PR event.

In addition to moderating the opening debate of the World Forum for Communication Top-Managers, Behar has also been selected to be the host of the official award ceremony for the best PR experts at the Forum's gala dinner.

Some 350 participants will attend the 2011 Communication on Top Forum in Davos, double the number of participants in 2010.

Maxim Behar has been in charge for more than a decade of Bulgaria's leading PR agency M3 Communications Group, Inc, an associate of global PR corporation Hill&Knowlton. He is the Chair of the Bulgarian Association of PR Agencies (BAPRA), and in November 2010 he was elected treasurer of the board of the International Communications Consultancy Organization (ICCO), the most prestigious global organization of PR associations.

Paul Holmes is the founder and CEO of The Holmes Report, a publication dedicated to providing insight, knowledge and recognition to public relations professionals. The Holmes Report organizes the world's largest and most sought after public relations awards competition, the SABRE Awards, which recognizes Superior Achievement in Branding and Reputation in North America, EMEA and the Asia-Pacific region.

Garrett Johnston is a leading marketing expert with a thirteen-year experience, chair and member of the board of directors of Brainstore. In 2006, Garrett Johnston became the strategic director of MTS and managed the company till 2010.