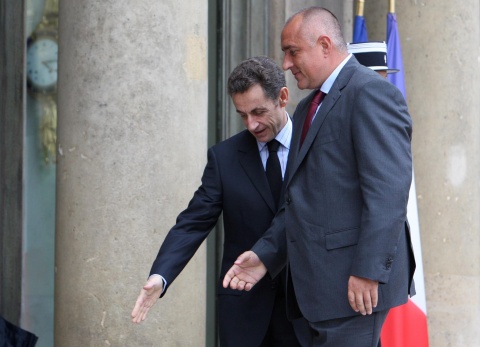 Back in Oct 2009 Bulgarian PM Borisov (right) claimed to have gotten French President Sarkozy to cancel the EUR 1 B deal for French corvettes. A US diplomatic cable reveals Bulgaria was under pressure from France for this deal. EPA/BGNES

The US Embassy in Sofia sought to discourage Bulgaria from going for costly armament procurement deals over concerns with the latter's limited funds, a newly released US diplomatic cable provided by Wikileaks shows.

The document entitled "Strategy to Shape Bulgaria's Military Modernization" is a US diplomatic cable sent on October 29, 2007, by John Beyrle, then US Ambassador to Bulgaria.  It was passed by Wikileaks to The Daily Telegraph, which published it late Tuesday night.

It demonstrates that the US has sought to influence the modernization of the Bulgarian armed forces primarily in the direction of enhanced capabilities for deployment of small Bulgarian detachments abroad.

In the document former US Ambassador to Bulgaria explicitly points out that Bulgaria is under pressure from France over the EUR 1 B corvettes deal, and that the best option for the Bulgarian Air Force would be to acquire older models of US fighter jets such as F-16 and F-18.

However, the major concern of the US Embassy in Sofia is not to secure the Bulgaria's arms deals for US producers and to fend off other suppliers but to prevent Bulgaria from pouring huge amounts of money into "budget-busting mega-procurements" that would deploy Bulgaria's anyway limited funds. The document does mention that while US companies could also bid for the Bulgarian procurement contracts, the primary interest of the USA is to discourage Bulgaria from going for costly programs that could affect its other defense capabilities.

"Bulgaria has been under intense pressure from France to sign a massive ship procurement deal worth over one billion dollars. While modernization of the Navy remains a goal, we will continue to advocate against Bulgaria spending an amount greater than its annual defense budget on this single procurement, particularly since this purchase exceeds Bulgaria's operational requirements and will not address its own stated top priority of improving Bulgaria's ability to deploy and sustain troops outside its borders," the cable to the US State Department says.

The concerns of John Beyrle, who is currently the US Ambassador to Russia, for Bulgaria's arms deals appear to have materialized later as in 2009, facing a rising budget deficit and a penniless , Bulgaria's Borisov government claimed it managed to get Sarkozy and France to agree to a cancelation of the corvettes deal.

In November 2010, however, it became clear that the notorious arms deal about Bulgaria's purchase of two corvettes from France is still up in the air. Defense Minister Anyu Angelov revealed unexpectedly the negotiations on the French arms purchase have been frozen, while for all practical purposes the deal had been reported to have been canceled by Bulgaria for lack of funds.

After a tender in 2007, the French company "Armaris" planned to sell to Bulgaria 2 corvettes for BGN 1 B. French President Sarkozy first put on the table the corvettes' purchase in 2007 when he visited Sofia after his diplomatic triumph with the release of the Bulgarian medics jailed in Libya.

Bulgarian PM Borisov claimed to have canceled the deal in October 2009 during a visit to Paris, stating on that occasion that the corvettes were not feasible because the country's previous rulers had not slated any money in the budget for such splurge. Back then Borisov said Sarkozy and his Cabinet showed understanding with respect to Bulgaria.

However, Angelov made it clear the deal was not canceled altogether. He said the talks were frozen because initially Armaris won the tender by offering a price of EUR 187 M per vessel; subsequently, however, the price grew to EUR 498 M for the two corvettes, or EUR 249 M each. The deal was actually included in a declaration for strategic partnership that Sarkozy and ex PM Stanishev signed in Paris on July 4, 2008; it was frozen after that.

Bulgaria's Defense Ministry first announced the tender for four corvettes in 2005. The Dutch firm Medvede won initially but after that the results of the tender were revised by the Ministry. After the Stanishev-Sarkozy meeting in Paris in July 2008, the deal was downsized to two corvettes. Subsequently, France offered Bulgaria licenses for the construction of military and commercial ships in Bulgarian shipyards but this offer failed to materialize.

As far as Bulgaria's purchase of new fighter jets, one of the major, long-anticipated modernization efforts for the Bulgarian armed forces, the deal is expected to go through in 2012.

"Bulgaria should be steered away from the purchase of additional Russian fighters, which are currently an obstacle to Bulgaria's transformation to a more operationally and tactically flexible organization as expected by NATO. A slightly older, perhaps used aircraft of intermediate complexity, would allow Bulgarian pilots to quickly master new systems and immediately become interoperable partners. We plan to advocate against new, very expensive systems such as the Eurofighter, Swedish Gripen, and Joint Strike Fighter in favor of very capable older versions of the F-16 or F-18 as a bridge and catalyst for operational and tactical transformation. The Bulgarians may be eyeing new combat aircraft, and U.S. manufacturers will, of course, be in this hunt. But cost factors would exhaust the defense budget, and Bulgaria would be hard pressed to perform essential training and maintenance functions on such a squeezed budget," former US Ambassador Beyrle wrote to Washington in 2007.

In October 2010, Bulgaria's Defense Minister Anyu Angelov finally revealed that the Defense Ministry will start within months its tender worth about BGN 1 B for the purchase of new fighter jets to replace the outdated MiG-21s, while modernizing its MiG-29s.

No exact amount of money the Bulgarian government plans to pay for the deal had been revealed so far, and the BGN 1 B figure mentioned by Angelov probably should not be regarded as precise. It is also unclear how many planes Bulgaria wants to purchase.

Angelov did make it clear, however, that the Cabinet will consider few other options outside the American F-16, the German-UK-Italian-Spanish Eurofighter Typhoon, and the Swedish Gripen.

Contrary to the suggestion in the 2007 US diplomatic cable, in 2010, Bulgaria's Defense Minister Angelov has made hints questioning the feasibility of acquiring older or second-hand US fighter planes that might be interpreted to mean that the Borisov government will seek to buy brand-new jets.

The tender for the procurement of the new fighter jets for the Bulgarian Air Force will be announced at the beginning of 2011. The new plane will be selected by the middle of 2012, and the delivery should start in 2015.

Sweden's Saab was especially proactive in 2010 with respect to offering its Gripen fighters to the Bulgarian government, apparently in an attempt to balance the strong position that the United States and the major Western European powers have in Bulgaria. Bulgaria has also considered buying second-hand F-16s from the USA, but will most likely go for new planes regardless of which supplier it will decide to go for.