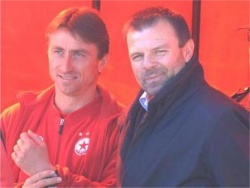 The Bulgarian coaches of one of the leading Egyptian football teams, ENPPI, believe that the civil unrest in the country will most likely terminate Egypt's football championship for a month.

Stoycho Mladenov, a former head coach of the Bulgarian national football team, and current head coach of ENPPI Cairo, and his assistant Anatoli Nankov (both are former players of CSKA Sofia), have been barricaded in a Cairo apartment complex for the past few days as Egypt saw not just protests against the Mubarak regime but also armed gangs of looters in its major cities.

Mladenov and Nankov are arriving home to Bulgaria Tuesday on the plane sent by the Bulgarian government to collect some 70 Bulgarian (out of some 200-300 in total living in Egypt) who have asked to be evacuated.

"We just hope that we will be able to come home to Bulgaria sooner because it is clear that there won't be football in Egypt for a while," Nankov and Mladenov managed to tell the Bulgarian 24 Chasa daily over the phone even though most of the time the cell phone networks in Egypt are not functioning.

Stoycho Mladenov said he first became aware of the political tensions in Egypt on Thursday when military officers interrupted drills of his team ENPPI and told him to go home, and that there will be no football matches over the weekend.

Mladenov and his wife have barricaded in their apartment in Rahat, one of Cairo's wealthier districts. His assistant Nankov joined them because his neighborhood was less safe. The entrance of Mladenov's apartment complex is guarded by two tanks from looters and by a local militia organized by the residents to patrol it. Mladenov and Nankov also took part in the patrols armed with metal sticks.

"For me this is like a war. It is terrible to see such things happen in the 21st century. I have been living in Egypt for more than a year. I have met and become friends with so many great people here. I have barely received such a warm welcome and attitude. I am no politician so I am not sure about the causes of this riot. But I just hope that normalcy will be restored, that we will be playing football again. If there is one thing the Egyptians really love, this is football. They cherish it and that is why they are the greatest football power in Africa," the former head coach of the Bulgarian national team explained.

He also said he was appalled by the fact that looters and escaped prisoners have managed to arm themselves and to steel Ancient Egypt treasures from museums.

Mladenov has also pointed out that the greatest problem for the evacuation of the Bulgarians from Egypt is getting to the airport because the roads are not safe.

He does not know for sure when the football championship in Egypt will be resumed but is certain that it will be at least a month before that can become possible.

In the fall of 2010, Stoycho Mladenov received the prize of Coach No. 1 in Egypt for his management of ENPPI. This is the second such prize Mladenov got in an Arab country after he was selected Coach No. 1 in the Persian Gulf Cup with his former team Al Ahli (Jeddah).

A third Bulgarian, Iliya Dyakov, who has been living in Egypt for 10 years, also a former football player, is also part of the ENPPI management as an interpreter and assistant for Mladenov.