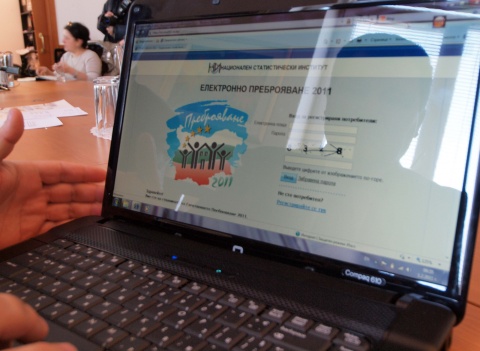 Bulgaria's first online census has not kicked off as smoothly as expected. Photo by BGNES

Hundreds of citizens have already expressed their dismay over numerous system faults which prevented them from filling in the census questionnaire, most notably the significant delay with which they received the necessary passwords.

Upon registering in the National Statistical Institute's website, every citizen willing to participate in the online census has to enter his or her personal identification number and an email address, on which one is supposed to receive a unique password needed for the questionnaire.

However, many people have already expressed their dissatisfaction on the Internet, stating they had to wait more than an hour to receive the password.

Strangely, the National Statistical Institute has claimed that the delay that might occur is "because of Internet providers." The institute has also stated its system can handle 400 000 visits simultaneously.

Furthermore, some of the questions included in survey have raised eyebrows, mostly those concerning who is "the head of the family". Besides seeming statistically irrelevant, these questions have caused controversy in some households. Peculiarly, the system requires that the "head of the family" should fill in the questionnaire first (as there is one questionnaire for the whole household), followed by "other individuals".