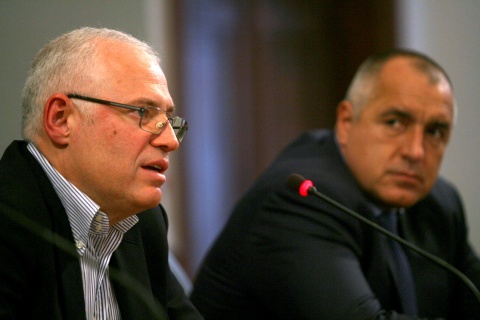 Tseko Minev, Chair of the Bulgarian Ski Federation, and Bulgaria's PM Boyko Borisov at the meeting Tuesday. Photo by BGNES

The Bulgarian government will provide almost BGN 2 M for the organization of the Skiing World Cup 2011, which will be held in the Bulgarian winter resort Bansko.

On Tuesday, Bulgaria's PM Boyko Borisov met with the Chair of the Bulgarian Ski Federation, Tseko Minev. The two discussed the upcoming Skiing World Cup round that Bulgaria will host at the end of February.

"We talked a lot until we clarified the amount needed for the Skiing World Cup. The state could help with BGN 1,95 M from the Sports Ministry budget and BGN 100,000 from the Economy Ministry for advertising. We hope to have a great competition on February 27-28," Borisov said.

He expressed his pride that the whole world could watch the Skiing World Cup that will be held in Bansko, while "Japan is struggling for 8 years to host the World Cup", in his words.

Borisov pointed out that the round of the Skiing World Cup could not be hosted in Bulgaria without state support.

Finance Minister Simeon Djankov said that the government has agreed to help the competition because of the tourism industry in Bansko.

"This would be a good investment in the development of the Bulgarian tourism," he said.

The Chair of the Bulgarian Ski Federation stated that the whole budget for the organization is BGN 5 M, BGN 2 M of which are provided by the state.

Minev has explained that 25 trucks will arrive to Bulgaria with equipment for the competition. Two rescue helicopters will be rented from Romania and safety nets of more than 30 km will be brought to Bulgaria with 4-5 trucks.

"The only thing that would be cheaper in Bulgaria, compared to the competitions held abroad, would be the salaries for the organization staff. About 1000 people will be hired and they will receive about BGN 1000 for the work," Minev said.

He pointed out that the Ski World Cup ranks alongside the biggest sports events in the world, like the tennis Grand Slam tournaments and Formula 1, which would ensure the high rating of the ski competition.

About 5000 spectators will be able to enjoy the Ski World Cup live from the 4-level stands and about 10,000-15,000 spectators are expected to be present in Bansko.