Bulgaria Marks 1st Day of Homage to Victims of Communism 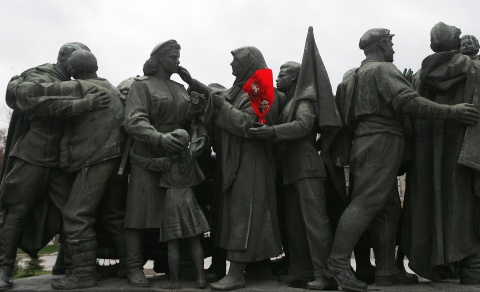 The statues of the controversial monument of the Soviet Army in downtown Sofia. Photo by BGNES

Bulgaria is marking Tuesday for the first time the official Day of Gratitude and Homage to the Victims of the Communist Regime.

The date February 1 was chosen because on this day, in 1945, the so-called People's Tribunal sentenced to death 3 regents, 67 members of the parliament, 22 ministers, 40 generals and colonels of the royal army and a number of other public figures. The sentences have been executed on that same day.

"This day will not only honor the victims, it will give us a starting point for a better understanding of the events of our recent history, without which it is impossible to progress as a democratic and dignified European country," Zhelev and Stoyanov wrote in their letter to Prime Minister, Boyko Borisov.

There will be a silent vigil in front of the Sofia City Hall building. The initiative belongs to the Committee for the Removal of the Monument of the Soviet Army in Sofia. The participants are appealing to the City Council to finally fulfill the 1993 municipal decision to dismantle the monument.

The Central Council of the Bulgarian anti-Fascist Union is giving a special press conference focused on "Public Resistance against Declaring February 1 Day of the Victims of Communism."

Solemn masses will be served in the cities of Lovech and Stara Zagora. In the city of Pleven, the right-wing parties Union of Democratic Forces (UDF) and Democrats for Strong Bulgaria (DSB) and the Union of the Victims of Repressions after September 9, 1945, are organizing a gathering to pay respect to the victims of the Communist regime.