Bulgarian Minister: Tobacco Growers to Get Funding in Any Case 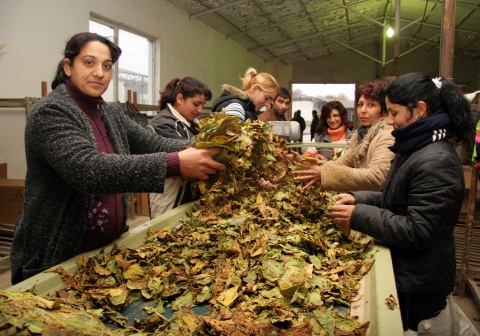 Tobacco growers will receive funding, which will nto be tied to the state budget, Bulgaria's Agriculture Minister, Miroslav Naydenov, said. Photo by BGNES

Payments of state funding to tobacco growers will not be tied with budget 2011, Bulgaria's Agriculture Minister, Miroslav Naydenov, announced Monday.

At the end of 2010, after tobacco producers protested in front of the National Assembly, Naydenov said that if there is an over-budget in June 2011, they will receive BGN 70 M of state funding.

However, at a meeting between the minister and tobacco producers on Monday, he promised that funding will not be tied to the state budget, but rather with the creation of a strategy for development of the sector.

In Naydenov's words, the new condition would ensure that tobacco producers receive state funding in any case.

The strategy for development of the tobacco sector will be prepared by the Bulgarian government, MPs and representatives of the producers.

The notified state funding that tobacco growers should receive for 2011 and 2012 is BGN 143 M. If the strategy is ready by May 2011, the producers will be able to receive half of the money, Naydenov said.

At the meeting, tobacco growers have asked the state to intervene and accelerate the campaign for purchasing of their crops.

Naydenov pointed out that some major buyers do not comply with the agreed deadlines and so he will meet with their representatives to urge them to perform their duties.

“There might be withdrawals of licenses for companies purchasing tobacco. According to the law, they have to buy the agreed quantities by the end of February,” Naydenov said.

He noted that the Bulgarian Competition Protection Commission will be referred over suspicions of cartel agreements between buyers who deliberately maintain low prices when purchasing tobacco prom the growers.