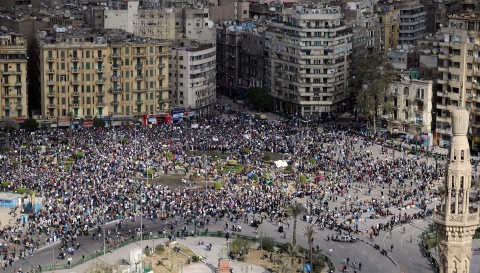 Egypt's President Hosni Mubarak has sworn in a new government, replacing the one that resigned after unprecedented anti-government protests across the country.

The state TV announced the most significant change, which concerns the interior minister. Mahmoud Wagdi, a retired police general, was named to replace Habib el-Adly, who was despised by Egyptians for brutality shown by security forces.

Culture Minister Farouq Hosni, who had served the longest time, was replaced by Gaber Asfour, a widely respected literary figure.

Egypt's most famous archaeologist, Zahi Hawass, was named State Minister for Antiquities, which is a new post.

The new cabinet is unlikely to appease tens of thousands of protesters, who have taken to the streets in cities across the country since last week, demanding the ouster of the president, who ruled for nearly 30 years, and his regime.

The civil protests in Egypt have resulted in paralization of the country. Earlier Tuesday, the opposition announced it hopes for a million people to walk out in Cairo in a "mega protest" to keep pressuring the ousting of Mubarak.