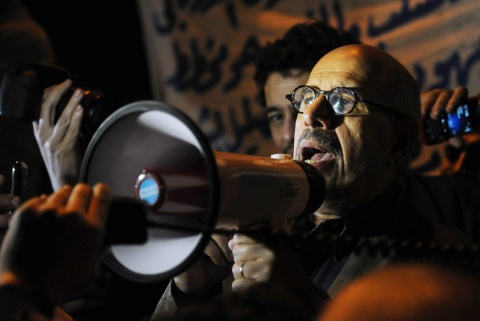 Nobel Peace Prize laureate Mohamed ElBaradei has declared that Egypt is at the start of a "new era", speaking to a rally of protesters against the Mubarak regime on the Tahrir Square in downtown Cairo.

Earlier on Sunday, Mohammed ElBaradei, a former head of the International Atomic Energy Agency and an outspoken critic of 82-year-old Egyptian President Hosni Mubarak, was supported by the major opposition forces, including the controversial radical Muslim Brotherhood, to negotiate with Mubarak.

ElBaradei told the thousands of protesters on the Tahrir Square in Cairo that Egypt is going in the right direction, and expressed confidence that the street protests will prevail against the Mubarak regime.

"What we have begun cannot go back," the pro-democracy activist has declared.

"Mubarak has to go immediately. This is the first step before we can get out of this mess, this is total chaos right now. The second step is – we have to have a government of national salvation," ElBaradei said earlier on Sunday speaking on the BBC.

Speaking on CBS, ElBaradei said the US government is "losing credibility by the day" in Egypt because it appears to be "lending support to a dictator."

The Obama administration continues to say that Mubarak must allow free and fair elections and put his nation on a path to "real democracy," but has stopped short of endorsing the calls of Egyptian protesters for him to step down.

Egypt's civil protests were less unruly on Sunday compared with the previous two days but tensions continue to be high and the country has succumbed into chaos will raging looters and armed gangs robbing people and shops and storming prisons Saturday night.

Hosni Mubarak has been the President of Egypt since 1981.