CEZ Shocked, Outraged by Growth of Cable Thefts in Bulgaria 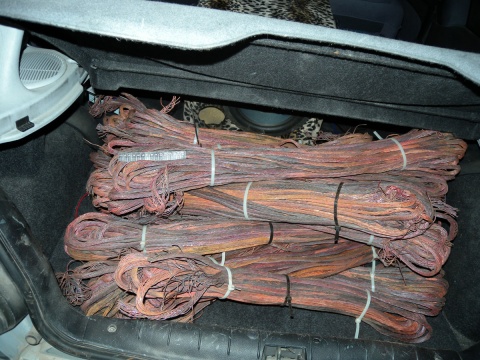 Pictured: a car trunk filled with stolen electric cables captured by the police. Photo by BGNES

Bulgaria's Czech-owned power utility CEZ has announced that the damages the company suffered from thefts of cables from its network almost doubled in 2010 compared to 2009.

CEZ, which is the electricity distributor in Western Bulgaria, including Sofia, said in a statement Sunday the worth of the direct losses from cable theft grew by 96% in 2010 compared to 2009. The combined effect of the damages incurred to company during cable theft grew by 184% in 2010 year-on-year.

In 2010, CEZ had to replace 90 km of stolen power lines, three times more than in 2008. This cost the company direct losses worth BGN 5.8 M, and indirect losses totaling BGN 4.3 M, bringing the total losses to over BGN 10 M.

"As a company providing vital services we place our clients on top of our priorities. That is why we cannot stand idly by watching the thefts and damages to our facilities, which threaten directly the security and quality of electricity supplies, and incur losses to the society since the money we invest in fixing them reduce our investment opportunities," Atanas Dandarov, member of the board of CEZ Razpredelenie, is quoted as saying.

Dandarov has pointed out the company expects new legislation providing strict restrictions for the trade with metals and scrap, and harsh punishment for the perpetrators.

Cable thefts across Bulgaria are most often committed by Roma living in the countryside who are unemployed and organized in gangs, and rely on this kind of trade with metals for their living. Bulgarian traders of scrap iron, cooper, and aluminium usually close their eyes even when they receive freshly cut wires, and are aware that the metals sold to them were stolen.

The new legislative changes are expected to restrict the trade with metals only to people owning registered firms. However, it is doubtful how much such administrative measures would help provided the high unemployment in Bulgaria's rural areas, especially among the Roma who remain marginalized.

The authorities and individual officials and officers in the Bulgarian countryside after often afraid to tackle the theft of wires commited by gangs because the latter are highly cohesively.