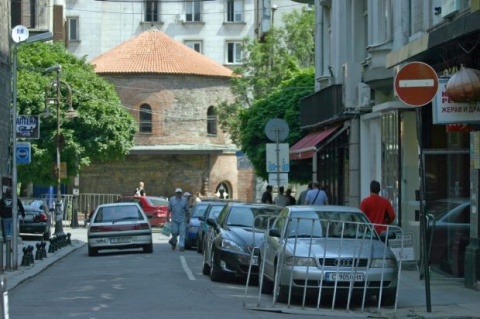 The City Hall expects the changes into the parking zones to bring a 25% ease-up of downtown traffic congestions. Photo by Sofia Photo Agency

The Center for Urban Mobility at the Sofia City Hall plans to extend the paid parking hours in downtown Bulgaria's capital to 8 pm on workdays.

Currently parking in the so-called blue zone is free after 6 pm.  According to the planned changes, the blue zone will be divided in 2 – one with prices of BGN 2 per hour, the other – BGN 1 per hour.

The new blue zone will be enclosed between the "Slivnitsa," "Vasil Levski," "Skobelev," and "Hristo Botev" boulevards. In this area, the parking fee will be BGN 2 per hour, and the short text messages (sms) for the payment will still be sent to the 1302 number.

The new "buffer" or "green zone" will be larger – between the "Maria Louisa," "Danail Nikolaev," "Konstantin Stoilov," "Evlogi and Hristo Georgievi" boulevards and the "Opalchenska" street – parking there will be cheaper – BGN 1 per hour and the sms will be sent to the 1303 number.

In addition to the blue and green zone, there will be a "yellow" one – on particular streets and boulevards close to shopping malls and business centers. It will be established by an order of the Sofia Mayor.

The City Hall foresees these changes would bring a 25% ease-up of downtown traffic congestions.

Those who have permanent addresses and reside on the above areas will be able to park near their homes for the price of BGN 120 per year.

The changes are expected to become effective in May, 2011.