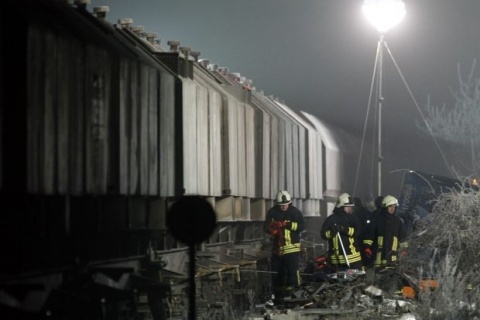 The rescue operations in a train collision in Germany involve over 150 firemen and police. Photo by DarikNews

A train crash in eastern Germany killed at least 10 people and injured another 33 late Saturday.

A local passenger train and a cargo train collided head-on in the state of Saxony-Anhalt , near the city of Magdeburg.

The passenger train, the HarzElbeExpress, was the last train of the evening out of Magdeburg. It was travelling on a single track section between Magdeburg and Halberstadt. Overnight engineering work was scheduled for that same track.

The cause of the crash remains unclear at the moment.

Several cars were derailed after the collision near the village of Hordorf at about 10:30 pm.

Local police report the rescue operations, involving over 150 firemen and police, are ongoing and the death toll may rise further.

A spokesman for Veolia, the company which runs the HarzElbeExpress service, said that the train had a capacity of about 100 people. About 45 people were on board at the time of the crash.