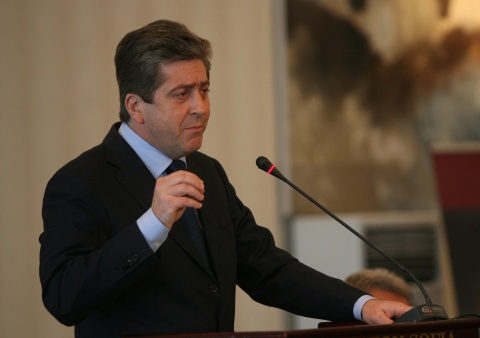 Bulgarian President Parvanov has protested against his involvement in "Tapegate". Photo by BGNES

"If the prime minister said something like that, it is probably because he is still jet-lagged from his trip to Japan. I don't have another explanation," Parvanov joked at first when asked to comment on Borisov's allegations that the President is the puppet master of a vicious campaign against him with leaking of conversations tapped by the state intelligence.

"It is clear for everybody that this government wiretaps its own conversations, and they throw tapes from special surveillance devices at one another, and thus they compromise the very use of these devices, and the fight against organized crime. But all jokes aside, if Prime Minister Borisov really said that I am behind this affair, I will ask the Chief Prosecutor to investigate who is doing the wiretapping, and who is spreading the leaked information," Parvanov declared.

He further said that if his name is cleared by the prosecution, and the prime minister does not apologize, a libel suit against Borisov will follow.

The "Tapegate" recordings have formally been leaked by two sources - the Galeria weekly and the marginal conservative party RZS ("Order, Law, Justice"), both of which are deemed to be connected with Aleksei Petrov, a former undercover agent arrested in a special police operation in February 2010, dubbed "the Octopus" and "the Tractor."

The tapes, whose authenticity remains disputed despite the fact that several institutions and alleged independent experts have come up with differing conclusions on whether they were manipulated, contain alleged information that the Borisov government is favoring certain companies and individuals with respect to investigations and appointments in the Customs Agency. All tapes are of conversations of Customs Agency head Vanyo Tanov.