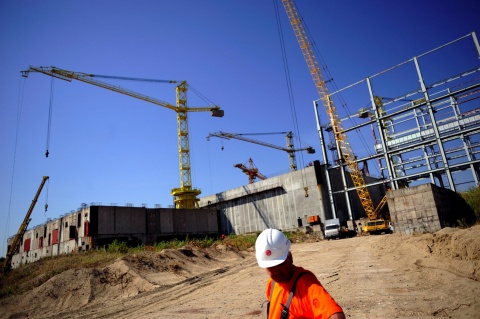 A file picture dated 03 September 2008 showing workers during the construction of the first 1,000 MW unit of the second nuclear plant of Belene, Bulgaria. Photo by EPA/BGNES

Cash shortages and uncertainty over energy prices are delaying or cutting back nuclear power projects across Central and South-Eastern Europe, threatening energy supply and a push to abandon polluting coal.

Investors are retreating, worried that future energy prices might not give them a good return.

Many countries in the region have looked to increasing atomic power to provide a stable energy supply and to help meet tough new EU emissions targets.

Romania, Poland and the Czech Republic are some of the European Union's least energy-dependent states, but the delays put them at risk of boosting imports in a decade or so as ageing coal-fired plants are shut or become too expensive to run.

Romania is left with just two foreign partners and will be casting for new investors, a search that will likely delay the project.

Bulgaria, the Czech Republic and Poland have also hit delays in their plans to build or expand nuclear generation.

"There is a collection of issues inhibiting the building [...] funding is a problem, governments are less willing to put in money, the EU's plans of having competitive pricing takes away some of the security of knowing what prices will be in future."

After a tender failed to attract investors for a new nuclear plant in Lithuania, its president said it needed to rethink its alternatives

In the Czech Republic, state-controlled power group CEZ, Central Europe's biggest utility, postponed a tender in 2010 to expand its Temelin nuclear plant. Slovenia was expected to approve a decision to build a second plant by 2020 last year, but the decision has yet to come.

Croatia will likely not decide before 2012 on whether to partner Slovenia or Hungary for a plant or build a second one on its own territory.

Poland, which generates most of its power from coal, wants to build a nuclear power plant but has struggled to find skilled workers and clear legislation needed to move the project along.

"The world has changed [...] everybody is a bit more careful about spending big money," said Stephan Werthschulte, head of the power generation business at consultants Accenture.

"These projects are more complex than in the past [...] the appetite for risk is lower so you have more partners."

Romania, where energy production is largely in state hands, estimates it will need to shut down and replace a third of its power plants by 2020. It sees demand rising by 2% on average each year until then. But with the exception of some small scale new hydro power units, it last built a new power unit in 2007, when its second 706 megawatt nuclear reactor went on stream.

The economy ministry is now waiting to see if remaining partners Enel and a local unit of ArcelorMittal would like more shares in the future two units.

"We will then launch a new tender for new investors," a ministry official has said. "There should be interest for it."