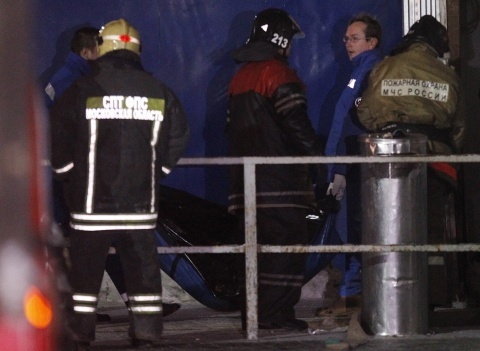 Emergency workers carry out the body of a victim at Domodedovo airport in Moscow, after a bomb exploded Monday afternoon, killing at least 35 and sending more than 180 badly injured. Photo by EPA/BGNES

An ethnic Russian member of a North Caucasus militant group is the first suspect in the Moscow airport suicide bombing, which killed at least 35 people, Russian media reported.

No firm conclusions have been made yet, but unofficial reports pointed to a link with a North Caucasus militant group, responsible for a suicide bomb plot on December 31 in Moscow.

The Russian Kommersant daily reported that the investigation was focused on a man named Razdobudko from the Stavropol region, north of the Caucasus mountains, who is suspected of belonging to an Islamist militant group Nogaisky Dzhamaat, which was supposedly eliminated in October 2010.

According to a security source, the man was the only suspect for the attack at the Domodedovo airport and this is why there was no need of rushed conclusion.

Kommersant stated once again previous reports that the attack could be linked to the New Year’s Eve attack in Moscow where a suspected female suicide bomber is believed to have blown herself up.

The suicide attack in Moscow on January 24 killed at least 35, including a Bulgarian native with Austrian passport, and injured at least 180. Of the casualties, 31 died at the airport, three in the hospital and one in the ambulance.

Militant groups from the North Caucasus are suspected of planning the attack, but no one has claimed responsibility yet.

Militants from the North Caucasus are frequently blamed for terror attacks in Russia, including a double suicide bombing in March 2010 that killed 40 people on Moscow's underground system. That attack was blamed on female suicide bombers from Dagestan.