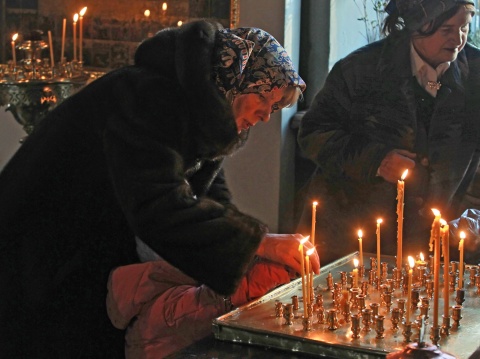 A woman places a burning candle in remembrance for the Domodedovo suicide bombing victims at a church in Moscow. Flags flew at half-mast on public buildings as Russia held a Day of Mourning. Photo by BGNES

Nikolay Ivanov, the Bulgarian native with Austrian passport, who was killed during the terrorist attack at the "Domodedovo" airport in Moscow, was from Sofia.

Ivanov's story, told by his parents, was published in the Bulgarian dailies "Trud" (Labor) and "24 Chasa" (24 Hours).

The father, Ivan, 78, says they found out from the internet their son has been killed and are crushed by sorrow and pain. The little boy is also Ivan, named after his grandfather.

The mother, Petruna, 69, tells they last saw Nikolay and Ivan on skype Sunday.

On the day of the attack, their daughter-in-law, Atanaska, 34, a Varna native, called them to tell them Nikolay had landed in Moscow.

"I landed and am waiting for my luggage," were the man's last words. He had promised his son to be back home Friday.

Ivanov left for Vienna at the age of 25, after receiving his diploma from the Sofia University for National and World Economy. He started his life from scratch in Austria, working odd jobs – porter during the day, taxi cab driver at night.

Through persistence and hard work he managed to land a job as Finance Director of a large furniture business with representation in Moscow. He had been flying every week to the Russian capital on business.

Two years ago, Ivanov received Austrian citizenship. He married Atanaska, and purchased an apartment in Vienna.

Russia has declared Wednesday a National Day of Morning for the 35 victims of the attack. They have all been identified. Another 117, including foreigners, remain listed in Moscow hospitals with injuries from the blast.

The Russian government slated RUB 120 M for the families of the victims and the of the injured.

It was revealed late Tuesday, the suicide bomber appeared to be from European origins, after his head was found among the rubble from the explosion.