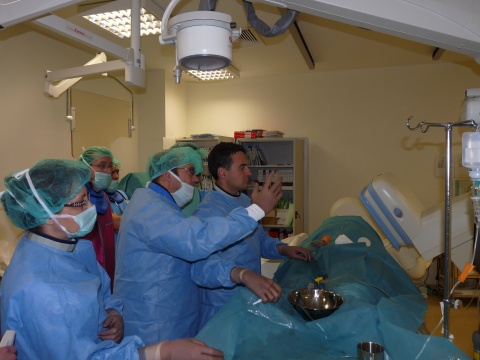 Mostly anesthesiologists and surgeons left Bulgaria in 2010, according to data from the Bulgarian Doctors Union. Photo by BGNES

More than 500 Bulgarian doctors left the country to go work abroad in 2010, according to the Secretary General of the Bulgarian Doctors Union, Dimitar Lenkov.

On Wednesday, he announced the data, established by the union on the basis of issued certificates for good medical practice, required for working abroad.

According to Lenkov, the number of doctors who left Bulgaria in 2009 was 400, while the number in 2008 was 380. He noted that most of the doctors head to Germany, France, England, North Ireland, Denmark and Sweden.

The pathoanatomy specialists in Bulgaria are below the minimum – only 70-80 in the whole country. The lab specialists are also few - only 280.

A strong drop was seen in 2010 in the number of virologists, rheumatologists, infectious diseases specialists, allergy specialists and even general practitioners, Lenkov said.

He has explained that some regions of Bulgaria, mostly mountain areas that are difficult to reach, some areas in Northwestern Bulgaria and the Rhodope Mountains, lack general practitioners.

The data from the Bulgarian Doctors Union showed that the number of nurses is also below the minimum. At present, they are about 30,000.

"According to the world standards for quality of medical service, one doctor should work with two nurses. In Bulgaria, one doctor works with one nurse and some doctors even work without nurses," Lenkov said.

A huge number of specialists in internal diseases also left Bulgaria because the National Health Insurance Fund (HNIF) does not sign contracts with them, but rather with doctors on narrow specialties.

In comparison, Germany looks for specialists in internal diseases and it pays them EUR 6000 per month, Lenkov said.

"How can we keep doctors if they receive EUR 6000 in Europe," Lenkov rhetorically asked.