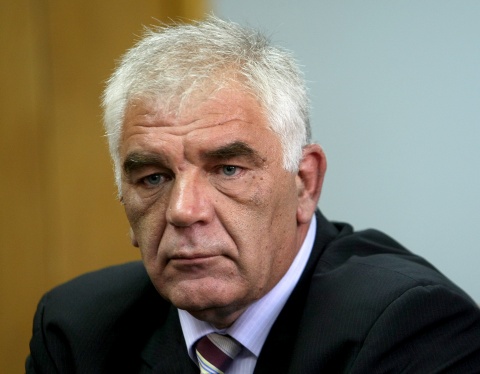 Bulgarian Customs Agency Director, Vanyo Tanov, is amazed someone would believe he can mix a personal identification number with a cell phone number. Photo by BGNES

The Director of the Bulgarian Customs Agency, Vanyo Tanov, does not remember any particular names being mentioned in his numerous conversations with Prime Minister, Boyko Borisov.

The statement was made by Tanov himself during a special press conference Wednesday to comment on the latest scandal involving taped phone conversations where Borisov is heard telling the Customs Head about the need to restore to work a friend of his at Sofia airport.

According to one of the tapes, Borisov instructs Tanov, to make sure that Nikolay Vuchev, with whom he often plays football, is reassigned to his job at Terminal 2 at Sofia airport.

The Customs Chief voiced the hypothesis the PM had been provoked to make these phone calls because many people have complained to him about being fired without a reason.

Tanov did, however, make one important revelation about President, Georgi Parvanov, saying the latter complained to Borisov about the Customs Chief executing tax probes ruining some businesses. The PM had called Tanov to tell him about the President's "displeasure."

The first recordings of the Custom's head and Borisov, which authenticity is yet to be proven, reveal Borisov provided a cover-up for the owner of the "Ledenika" beer company, Mihail Mihov, on Parvanov's request

At the press conference, all reporters received copies of the documentation related to Vuchev changing positions at the airport. It shows Tanov wanted to layoff Vuchev, but was unsuccessful due to the interference of the labor union, which did not approve the validity of the doctor's note (TELK) that the Customs employee has a heart condition and needs to be reassigned.

To comply with TELK, Tanov, initially, moved Vuchev to another work location, which is inside and to a job without shifts.

During the taped conversation, Tanov says he had tried to dial a phone number, but it had been wrong, to which Borisov replies this was not a number, but Vuchev's EGN (personal identification number).

"Do you really believe I will dial an EGN?" the Customs Chief asked reporters at the press conference.

Meanwhile, later on Wednesday, Tanov is scheduled to appear for a hearing with the Parliamentary Subcommittee for Internal Order and Public Safety to answer questions about the tapes.