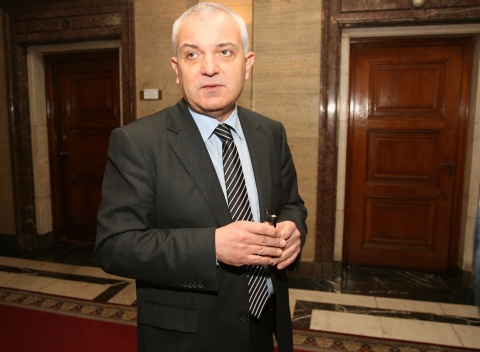 The Head of the Parliamentary Subcommittee for Special Surveillance Devices Control, Yavor Notev. Notev is from the far-right, nationalist Ataka party. Photo by BGNES

After the 4-hour long talks with Milenov, the Subcommittee's Head, Yavor Notev, declined offering details, but stated the information obtained by the former DANS employee is worth a further probe.

The reason for the hearing are Milenov's claims the scandalous taped conversations between Prime Minister, Boyko Borisov, and the Director of the Customs Agency, Vanyo Tanov, are authentic in their content.

Notev informed the man has been indeed employed by DANS in March, 2010, when the tapes were made, adding the transcript from the meeting will be forwarded to the Prosecutor's Office.

On January 21, the late nigh talk show of popular host, Slavi Trifonov, aired a video of Milenov, speaking about quiting DANS and abandoning a promising career because he disagreed with the policies of Interior Minister, Tsvetan Tsvetanov, who was using the Agency to discredit political opponents.

In the video, Milenov insisted on a hearing with the Parliamentary Subcommittee over having classified information on the scandalous tapes.

Notev further said the Subcommittee's members need more time to verify all details, adding Milenov had been very laconic in describing the situation.

The former DANS employee was led outside the Parliament building by guards in order to prevent media access to him.