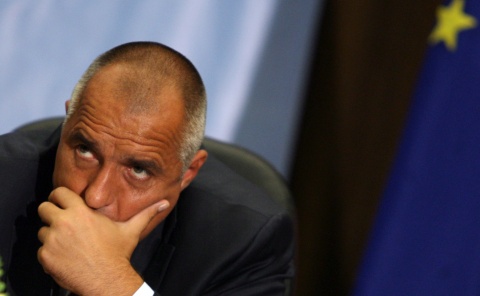 PM Boyko Borisov has slammed the tapes as a manipulated attack against him because of his fight against corruption and the country's former secret services. Photo by BGNES

Bulgarian Prime Minister Boyko Borisov has become embroiled in another scandal involving taped phone conversations where he is allegedly heard speaking of the need to restore to work a friend of his at Sofia airport.

In what appears to be a new chapter in “Tapegate”, a scandal that shook the Bulgarian government in early and mid January, the Bulgarian weekly Galeria published on Wednesday a new, third series of recordings, involving Prime Minister, Boyko Borisov and the Director of the Customs Agency, Vanyo Tanov.

According to one of the tapes released Wednesday, Borisov instructs the country's customs chief, Vanyo Tanov, to make sure that Nikolay Vuchev, a friend of his, with whom he often plays football, is brought back to work at terminal 2 at Sofia airport.

This conversation is followed by Tanov’s call to the head of the airport customs Pavel Manchenko. Finally, in the last conversation, the prime minister congratulates Tanov on the good job he has done.

Here is the transcript from the alleged Borisov – Tanov conversation:

VT: Nothing special… I received your message, I am trying to call this number, but it says the code I dial is wrong.

BB: Nooo, this is his EGN (a 10-digit unique number assigned to each Bulgarian citizen or resident foreign national), not his mobile phone number.

VT: Well… I will see to it right now.

BB: See how things are and call me!!

The tapes were released earlier this month at a news conference, again held by by the Galeria weekly, a paper believed to be the mouthpiece of Aleksei Petrov, former special agent of the State National Security Agency DANS, (currently under house arrest), who has been investigated on organized crime charges since his detention in the much advertised "Operation Octopus" in February 2010.

At another press conference earlier in January, Galeria released a tape of a conversation between the Prime Minister and the Customs Director, alleging Borisov provided a cover-up for the owner of the "Ledenika" beer company, Mihail Mihov.

In another tape, Tanov can be heard telling his Deputy, Antoniy Strandzhev, to keep the documents secure while he is away. Strandzhev insists the recordings are true and he had such phone conversation with his former boss.

The Galeria weekly has also released other discrediting recordings of phone calls between Tanov, Finance Minister, Simeon Djankov, and his Deputy, Vladislav Goranov.

Customs Agency head Tanov's initial comments to the new tapes were that does not remember any particular names being mentioned in his numerous conversations with Prime Minister, Boyko Borisov.

A former employee of Bulgaria's National Agency for State Security (DANS), Rosen Milenov, who claims that the tapes are authentic, and Customs Agency head Vanyo Tanov were interrogated late Tuesday evening by the Parliamentary Subcommittee for Special Surveillance Devices Control but the interrogations have not produced any definitive and official conclusions yet.