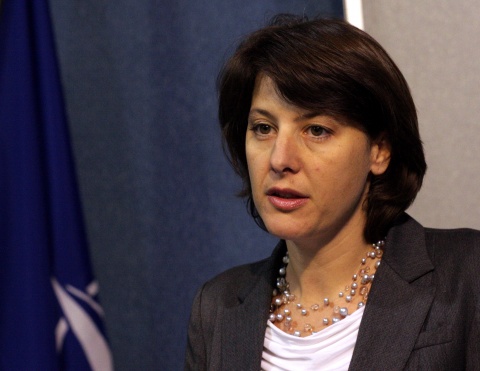 Vesela Cherneva, Spokesperson of the Bulgarian Foreign Ministry, has sought to refute the criticism of key EU member states on Bulgaria's Schengen readiness. Photo by BGNES

The Foreign Ministry in Sofia has sought to assuage the fears of several influential EU member states over Bulgaria's fitness to join the borderless Schengen Agreement.

The Spokesperson of Bulgaria's Foreign Ministry Vesela Cherneva has declared the government's position that the country will be meeting fully the Schengen Area accession criteria by March 2011.

Bulgaria and Romania were originally expected to join the Schengen Agreement in March 2011.

However, in the last weeks of 2010 and the beginning of 2011, key EU member states – most notably France, Germany, Austria, the Netherlands, Finland – have declared their opposition to the Schengen accession of the two Balkan states saying it would be premature as Bulgaria and Romania still face issues with the implementation of the Schengen requirements with respect to controlling what will become their external EU/Schengen boders.

What is more, since December 2010 the Interior Ministers of France and Germany as well as France's EU Affairs Minister Laurent Wauquiez have voiced additional criticism with respect to Bulgaria and Romania as far as the progress in their judicial reform and rule of law is concerned, and have demanded that the European Commission's post-EU accession monitoring of the two newcomers under the Cooperation and Verification Mechanism (most notably EC's annual progress reports expected in July) should be taken into account when deciding upon Bulgaria and Romania's Schengen fitness.

The last report of the Brussels working group on the Bulgarian and Romanian Schengen readiness has found problems in both countries – but most of all – with Bulgaria's border control along its Turkish border. This has led the Romanian government to slam Bulgaria numerous times for dragging it down since a decoupling of the two states for Schengen is unlikely as this will mean additional spending to secure their joint border.

Cherneva has declared that Bulgaria is fully capable of executing its obligations as a country having an external EU border. She said that the government has carried out a detailed inspection of the functioning of the Schengen Information System (SIS) in Bulgaria seeking to disprove the statements of French EU Affairs Minister made last week that information from SIS could end up in the hands of international organized crime structures through Bulgaria and Romania.

"The unanimous experts' conclusion is that Bulgaria's national information system is in accordance with the best practices for the application of the legislation related to the Schengen requirements. Given this European assessment, there is no way to suggest that it is possible that data from SIS might end up in the hands of international organized crime," Cherneva is quoted as saying.

She has further explicitly pointed out the recognition of the European Commission that Bulgaria has made "unprecedented progress" in the fields of justice and home affairs in the past 1.5 years (i.e. since the Borisov Cabinet took over).

"Let me remind that in July 2010 (i.e. in the EC annual monitoring report – editor's note) the European Commission and the EU member states, including France, concluded that Bulgaria has a strong momentum for reforms and has undertaken adequate measures against organized crime and corruption," the Foreign Ministry Spokesperson said.

With respect to the recent conclusions of the working group on Bulgaria and Romania's Schengen entry in Brussels with respect to Bulgaria's shortage of staff and equipment to control the Bulgarian-Turkish border, Cherneva retorted that Bulgaria's border control corresponds with the best Schengen practices, and even "surpasses the established EU requirements" in some aspects.

She has reminded that Bulgaria ranks second in Southern and Southeastern Europe on the amount of heroin that its border authorities have captured.

Cherneva reiterated the position of the Borisov Cabinet that Bulgaria will be 100% Schengen ready by March 2011, and expressed hopes that the country's European partners will appreciate its efforts.

The Spokesperson also addressed the criticism and fears expressed recently by media in Western Europe that millions of people from outside the EU – most notably citizens of Macedonia, Serbia, Moldova, Ukraine, and Turkey – can get Bulgarian – and therefore EU – passports based on their claims of Bulgarian origin and the lax Bulgarian naturalization system.

Unofficial reports have it that the "easy" process for acquiring Bulgarian and especially Romanian citizenship is one of the stumbling blocks before the Schengen accession of the two Balkan states.

According to Cherneva, however, EC experts have concluded that Bulgaria's procedures for issuing visas and granting citizenship are in accordance with the best practices of the members of the Schengen zone and fully implement the requirements of the European Visa Code.

"Statistical information for 2001-2010 shows that the total number of persons who acquired Bulgarian citizenship in the past 10 years is about 64 000, that is 6 400 per year. This number is negligibly small given the policies of immigration and regulation of a number of other EU member states," the Spokesperson of the Bulgarian Foreign Ministry explained.

The most recent publication in the European media on this issue was an article of the French newspaper Le Figaro from January 20, 2011, which said that 1.4 million Slavic Macedonians can claim Bulgarian citizenship on the basis of being of ethnic Bulgarian origin, and some 300 000 ethnic Turks driven out of Bulgaria in the 1980 during the assimilation campaign of the former communist regime could also apply for Bulgarian passports.

In spite of the assurances issued made by the government in Sofia that Bulgaria will be fully qualified for Schengen accession by March 2011, it is virtually impossible that Bulgaria and Romania will be approved for entry according to the original deadline. Bulgarian Foreign Minister Nikolay Mladenov has recently mentioned he hoped that Bulgaria will make it into Schengen by the end of 2011, which appears to be a more plausible timeline.