Hungary Min: Romania Might Be Ready for Schengen, Bulgaria No 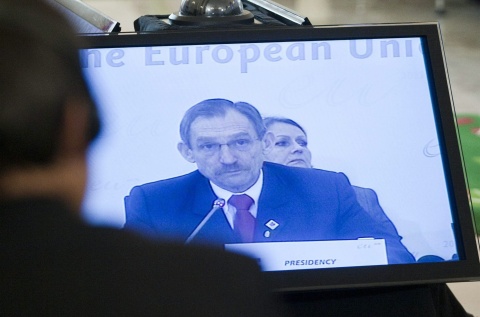 Hungary's Interior Minister Sandor Pinter is seen on a screen as he speaks during the opening session of a European Union Interior Ministers' Summit last Thursday at Grassalkovich Castle in Hungary. Photo by EPA/BGNES

Bulgaria has still work to do to fulfill technical requirements for Schengen Area entry, but the Hungarian EU Presidency still hopes for that to happen before the end of its term in June.

This was revealed by Hungarian Minister of Interior Sandor Pinter, who Tuesday presented his work at the European Parliament.

"The opinion of the experts makes it manifest that for the time being Bulgaria does not meet the requirements at its Turkish border in the area of Kapitan Andreevo. The authorities in Sofia recognize that and they have committed to overcome those weaknesses by mid-March," Pinter told MEPs.

He added that although Bulgaria's neighbor Romania might be ready with the technical requirements, there is no way the two countries can be decoupled for Schengen entry, since they share an extensive border.

Minister Pinter did not commit to any specific date the two countries will eventually join Schengen, after opposition by EU member states like France, Germany and lately Finland.

When interviewed by the Bulgarian National Radio, the Hungarian Minister of Interior said that if Bulgaria and Romania fulfill technical requirements by the middle of March, then that would make it possible to negotiate with France and Germany on other matters.

Pinter was moderately optimistic that the Schengen accession of the EU's two latest newcomers might be finalized before the end of the Hungarian presidency in June 2011.