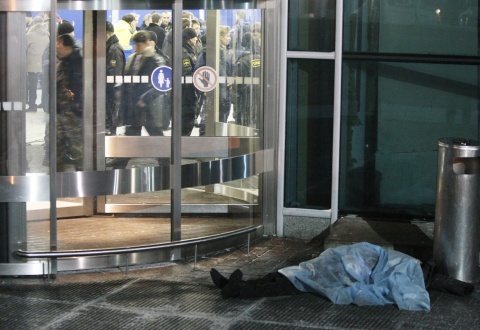 The body of bomb explosion victim is seen in front of an entrance door in the Domodedovo airport in Moscow. Photo by EPA/BGNES

The man, identified as Nikolay Ivanov, who was killed in the Monday terrorist attack at the Domodedovo airport in Moscow, was an Austrian citizen, not a Bulgarian one.

Ivanov, who was born in 1969, had received an Austrian passport two years ago. He worked for an Austrian company and traveled to Moscow on business.

The Austrian Embassy in Moscow is dealing with Ivanov's identification, the spokesperson of the Bulgarian Foreign Ministry, Vesela Cherneva, informs.

Earlier Tuesday, Cherneva confirmed the man was a Bulgarian native.

The spokesperson expressed condolences to the family of the victim and said the Ministry condemns the terrorist act, which killed 35 and injured an estimated 180 innocent people.