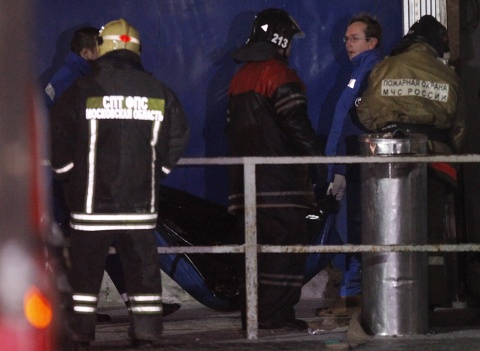 Emergency workers carry out the body of a victim at Domodedovo airport in Moscow, after a bomb exploded Monday afternoon, killing 35 and sending more than 160 badly injured. Photo by EPA/BGNES

A 44-year-old Bulgarian man with Austrian citizenship is one of the 35 people killed in Monday afternoon's terrorist attack carried out by a suicide bomber at the Domodedovo airport in Moscow.

Nikolay Ivanov Ivanov was traveling from Vienna with Lauda Air; his body was identified by the Russian Ministry of Emergencies. The Bulgarian Ministry of Foreign Affairs has informed his family.

Some 180 persons have been wounded in the Domodedovo attack, some of them are in critical condition.

At least two British nationals were among those killed, with a number of other non-Russian citizens among those accepted in Moscow hospitals.

Bulgarian President Georgi Parvanov and PM Boyko Borisov were among the world leaders who expressed their condolences to the Russian people and those affected by the attack, which they condemned as terrible and inexcuseable.