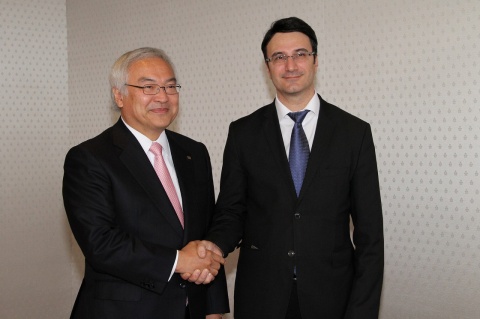 As part of a visit of a large Bulgarian government and business delegation in Japan led by PM Borisov, Bulgarian Minister of Economy, Energy, and Tourism Traicho Traikov met with Norio Sasaki, President and CEO of Toshiba Corporation.

The Toshiba management has confirmed that the company will construct a 10 MW photovoltaic park near Bulgaria's Yambol, an investment worth EUR 37.6 M that will provide electricity to 2000 households.

Toshiba has declared it will pursue the project on its own, thus dispeling a report of Japan's Nikkei business daily from last week that the corporation planned to set up a joint venture with Tokyo Electric Power and the Japanese government to build one of the world's largest solar power stations worth USD 1.2 B.

Toshiba's solar park investment in Bulgaria is part of a plan to develop similar projects in Europe and North America.

Bulgaria's Economy and Energy Minister Traikov has praised the project near Yambol even though it ended up being much smaller than the media reports would have it.

"This Japanese company is a first class investor, which is a good sign for Bulgaria and our desire to see a boost of foreign direct investment in 2011," Traikov declared saying also that the future Toshiba solar plant near Yambol will help Bulgaria achieve the 16% target of renewable energy sources production by 2020.

An example of a large-scale Japanese investment in Bulgaria's renewable energy sector is the 35-MW park Kaliakra Wind Power of the Japanese Mitsubishi Heavy Industries.

The wider-scale project that Toshiba has offered the Bulgarian government, however, focuses on the development of "smart grids" and the introduction of electric cars based on renewable energy sources, the Bulgarian Economy Ministry announced.

"This is totally in line with Bulgaria's desire to develop renewable energy and the introduction of electric cars. To do all that, we need the proper infrastructure managed by intelligent or "smart" electric grids. Unlike the existing grids, with smart grids, electricity is not only transmitted from a power plant in all directions but it can be moved from the source to the consumer and from the consumer to the source," Bulgarian Economy Minister Traikov explained.

Traikov pointed out that Bulgaria would not need new power plants if up to 20% of its cars were electric.

"When you have 20% of cars running on electricity, you can use them as a huge battery. You know, the greatest problem with electricity is that it cannot be preserved. When you have so many electric cars, you can charge them when there is a lot of cheap electricity, and then send electricity back into the grid when energy is expensive," Traikov said explaining that smart grids would necessitate massive investments in equipment, know-how, and management.

"We are currently making a commitment to start working together on this project," the Bulgarian minister said when asked about Bulgaria's specific commitments to Toshiba's initiative.

Other potential joint projects that Traikov discussed with the Toshiba management include nuclear energy and the production of nuclear turbines and the opportunities for building a new thermal power plant in Bulgaria.

In Traikov's presence, the Toshiba Corporation and the Bulgarian Energy Holding, a government megastructure uniting the largest state energy companies in Bulgaria, signed a Memorandum of Understanding and Cooperation on Energy Development.

Toshiba has made a commitment to help Bulgaria with preliminary studies of infrastructure and closer cooperation in nuclear, hydro, and thermal power.