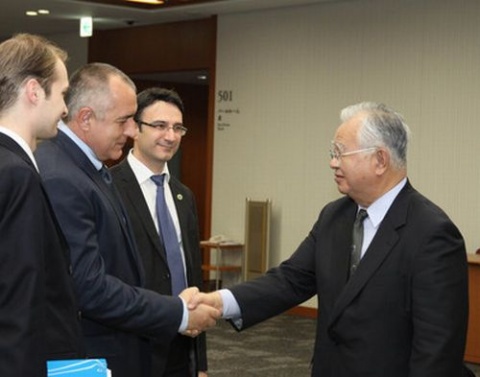 Japanese companies are exploring opportunities to use the Bulgarian ports on the Black Sea and the Danube for their trade with the European Union, according to the Bulgarian government.

Bulgarian Prime Minister Boyko Borisov, who is in Japan on a four-day visit (January 22-26, 2011) heading a sizable Bulgarian government and business delegation, met Monday with Hiromasa Yonekura, Chair of Nippon Keidanren, the Japan Business Federation, and CEO of the Sumitomo Chemical company.

The news from Borisov's meeting with Yonekura is that Japanese investment companies are considering channeling their EU trade through Bulgarian ports together with projects for building respective logistics centers and infrastructure, according to the press service of the Bulgarian Cabinet, even though no specific projects or companies have been mentioned.

"Bulgaria is a convenient entry point to the EU market. We have introduced an attractive investment and taxation regime, and we provide incentives to foreign companies investing in various sectors," Borisov declared during the meeting with the head of Nippon Keidanren.

The Bulgarian PM stressed the need for investments to develop further the infrastructure of Bulgaria's major Black Sea ports Varna and Burgas.

The Japan International Cooperation Agency (JICA) has already been massively involved with supporting the expansion of Bulgaria's Black Sea ports by providing favorable loans. However, the feasibility of the use of the Japanese money by the Bulgarian institutions over the past decade or so appears to be questionable as a new terminal for loose goods built at the Port of Burgas with Japanese funds remains empty, and controversial plans have delayed the expansion of the Port of Varna.

During his meeting with Yonekura, Bulgaria's PM Borisov has pointed out that the completion of the Trakiya Highway connecting the Bulgarian capital Sofia and the Port of Burgas will create better opportunities for transportation and trade. The Trakiya Highway is expected to be completed by mid 2012.

"We have established good cooperation in the fields of car parts manufacturing, energy, and infrastructure but we expected increased investments," stated the head of Nippon Keidanren.

He has pointed out that Japanese companies would consider investing in Bulgaria's renewable energy sources, the production of electric and hybrid cars, the construction of intelligent energy systems.

Earlier on Monday, Bulgaria's Minister of Economy, Energy, and Tourism Traicho Traikov, who was also present at the Borisov-Yonekura meeting, met with the management of the Japanese corporation Toshiba.

Toshiba and the Bulgarian Energy Holding (BEH), a government megastructure uniting the largest state energy companies, have signed a Memorandum of Understanding.