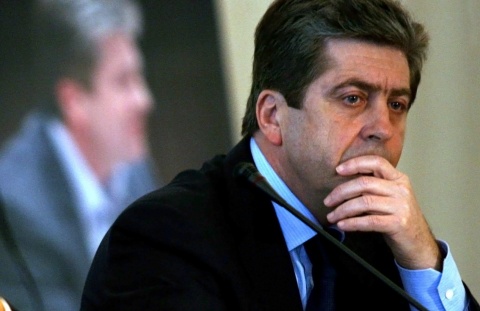 Bulgaria's President Georgi Parvanov, who himself was revealed in 2006 to have worked for the communist-era secret service under the code name "Gotse", has defended the former-agents-turned-ambassadors. Photo by BGNES

Bulgaria's president has made it clear he will resist pressure to sack forty-one ambassadors on the grounds that they worked for the communist-era secret service.

"I have read half of all secret files and it is only in the file of one ambassador that I found morally reproachful actions," President Georgi Parvanov said on Sunday as he presented his book entitled "The First Term of Georgi Parvanov".

He refused to disclose the name of the envoy.

The president pointed out that he is being constantly briefed on the reactions to these revelations abroad, but would not comment.

Bulgaria's parliament adopted earlier this month a declaration, demanding the withdrawal of the senior diplomats - including the country's ambassadors to Germany, the UK, China, and Russia - on the grounds they worked for the communist-era secret service.

The declaration was adopted with the votes of 152 members of parliament from the ruling GERB party, the nationalist Ataka, the right-wing Blue Coalition and the ethnic Turkish Movement for Rights and Freedoms.

Another thirty three MPs from the left-wing opposition and one independent MP voted against the proposal, saying they are against a a purge on political grounds.

The declaration called on the government, the foreign ministry and the president, whose job includes appointing ambassadors, to sack the diplomats with murky ties.

A month ago the Bulgarian diplomatic corps and the government as a whole were shaken by a scandal spurred by the disclosure that almost half of Bulgaria's acting heads of diplomatic missions were collaborators with the notorious "DS", or State Security, the secret police and intelligence service of the Bulgarian communist regime.

A special Bulgarian panel, investigating the communist-era police files, known as the Files' Commission, revealed that 192 diplomats, out of 432, who worked for the Bulgarian Foreign Ministry after the fall of the communist regime in 1989, had records of ties with the former State Security.

Bulgaria's Foreign Minister Mladenov was infuriated by the discovery, and declared his firm determination to purge the diplomatic corps of all former DS agents, arguing that the host countries' leaders would no longer trust the respective Bulgarian diplomats now that those have been revealed to have collaborated with the former communist intelligence and secret police.

Bulgaria's Prime Minister Boyko Borisov has backed firmly Mladenov stating that the discredited ambassadors have got to go. In order to recall most of them, however, the Borisov Cabinet of the center-right GERB party will need the signature of President Georgi Parvanov, a former leader of the Socialists, with whom GERB has been at odds.

Parvanov himself was revealed in 2006 to have worked for DS under the code name "Gotse".