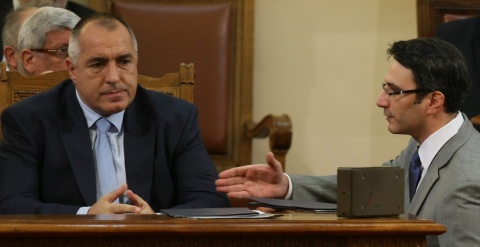 Economy Minister Traikov (right) extends his hand to PM Borisov after speaking during the confidence vote debates. Photo by BGNES

The combined profit of the Bulgarian state-owned companies increased by BGN 300 M in 2010 year-on-year, announced Minister of Economy, Energy, and Tourism Traicho Traikov.

Traikov spoke in Parliament Thursday during the debate for the confidence vote of the Borisov Cabinet.

He pointed out to the MPs that the government has made important modifications in the Investment Encouragement Act to lure foreign investors.

"The number of projects for boosting the exports of Bulgarian companies is on the rise," Traikov said.

The minister said he hoped the privatization of the Bulgarian state cigarette giant Bulgartabac should be completed by the middle of 2011.

He said the government will be setting up a unified institution to handle concessions of mineral resources – a structure, which in his words, has been expected by investors under the previous three Cabinets.

"For the first time Bulgaria's commercial offices abroad will become part of a united policy for external economic relations, and not a place for political appointments," Traikov said boasting progress in the tourism sector in 2010 in spite of the economic crisis.

The minister reaffirmed the EU-sponsored gas pipeline project Nabucco as a priority for the Cabinet. He also said the GERB government has set out to rid Bulgaria of its energy dependence on one source (i.e. Russia, and mentioned that the government has started procedures for share gas explorations and drilling in the Black Sea shelf.

Traikov also boasted the government has already reduced the bureaucracy by 15%, and is close to reached the goal of 20% reduction of the "administrative burden" by 2012.